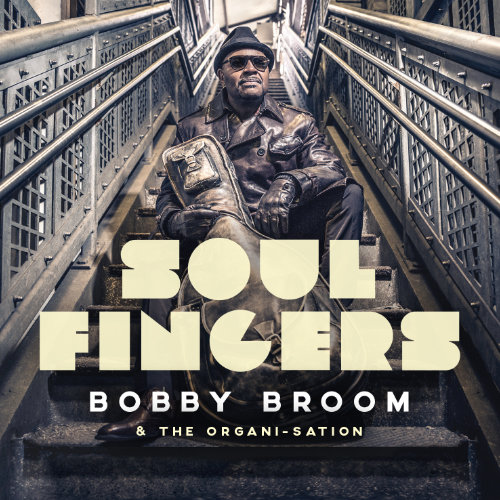 Veteran jazz guitarist Bobby Broom combines his jazz pedigree with his love of the pop tunes he grew up with in the ‘60s and ‘70s on his 12th recording as a leader, the aptly-titled Soul Fingers. It’s a formula that Broom worked to perfection on 2001’s Stand!, which had him interpreting songs by The Beatles, The Turtles, The Mamas and the Papas, Johnny Nash, Stevie Wonder and Sly & The Family Stone through a hard-bop lens. This time out he puts his personal spin on some iconic pop tunes from that same golden era in a swinging program with his Organi-Sation, featuring his longtime drummer Kobie Watkins and the Philly-born, Brooklyn-based B-3 ace Ben Paterson. Together they shuffle and swing their way through pop classics like The Beatles’ “Come Together,” Bobbie Gentry’s “Ode to Billie Joe,” Steely Dan’s “Do It Again,” Seals & Crofts’ “Summer Breeze” and others. And Broom, a continuation of that great jazz guitar lineage running from Kenny Burrell and Wes Montgomery to Grant Green, George Benson and Pat Martino, holds nothing back in his harmonic stretching and fleet-fingered flurries on these familiar vehicles.

Soul Fingers also represents a reunion, of sorts, between Broom and drummer-producer Steve Jordan, who played together in Sonny Rollins’ band during two different periods. “Steve and I went to the High School of Music and Art in Manhattan, though he graduated before I got there by a couple of years,” he recalls. “I later met him when we played together with Sonny Rollins in the early ’80s, though I think we did just one gig together back then. And then in 2005 when Sonny called again, Steve was in the band. So we really developed a rapport at that point and both realized that we had this simpatico, musically.”
Ten years after their last tenure together in Rollins’ band, Broom found himself immersed in a personal project during the summer of 2015. “I wasn’t doing anything that summer so I cracked open Logic, which people had been telling me about for years. And I started arranging these tunes, getting immersed in it and having a ball with it. And at some point I’m listening back to a couple of tunes and I’m thinking, ‘What am I doing here? Am I working on my new record?’”

When the answer came up ‘yes,’ Broom decided to seek out a producer to help him organize the session. “The process was so different than any other record I’ve done,” he says of Soul Fingers. “Usually I have the group and an idea about a theme, and based on the chemistry of the group we go in and execute the thing. But I got much more involved in this record. I was hearing horns and a bunch of different textures, so at some point I said, ‘I need somebody to help me with this one.’ And I immediately thought of Steve because of the soul music approach that I was feeling about the music. I thought he would be perfect for that, though it was basically a daydream. I mean, Steve Jordan produces John Mayer, Keith Richards, Robert Cray and Sheryl Crow. He doesn’t have time for a lowly jazz guitar player.”

It was Broom’s wife Maureen who finally persuaded the guitarist to contact Jordan. “So I emailed him and it took him less than an hour to get back to me with, ‘Let’s go!’”

For the core group of Soul Fingers, Broom utilized his Organi-Sation, which had toured for three months in 2014 as an opening act for Steely Dan. “We really solidified our chemistry on that tour, so it was like a hand-in-glove kind of thing going into this session,” he recalls.

They come out of the gate swinging hard on The Beatles’ “Come Together,” which has Broom firmly entrenched in that classic Green-Benson-Martino organ group mode. Bobby remains faithful to the melody at the beginning of the tune then near the end launches into some serious stretching with a burst of rapid-fire linear improvisation. “Ode to Billie Joe” is reconfigured in 7/4 time and features punchy horn parts by saxophonist Ron Blake and trumpeter Chris Rogers on trumpet and a vibes solo by Justin Thomas. Once again, Broom opens up and wails near the end of this familiar tune.

Next up, they render Steely Dan’s “Do It Again” (from 1972’s Can’t Buy a Thrill) as a loping shuffle-swing with Paterson contributing a killer B-3 solo along the way. For an alluring bossa nova–flavored reading of The Beatles’ “While My Guitar Gently Weeps,” Broom is joined by Brazilian guitarists Sergio Pires and Luciano Antonio, who create an entrancing background with their arpeggiated acoustics. “I used to do a long-running brunch gig with Sergio here in Chicago,” he explains. “He plays acoustic guitar and sings and I would accompany him and play solos. He’s so authentic and has such a great vibe and feel. And it was actually Sergio who recommended that we also get Luciano on the track. So we ended up using both their guitar parts together, which was kind of cool.”

Watkins conjures up a simmering, syncopated pulse on Seals & Crofts’ mellow “Summer Breeze,” the title track from their 1972 album. Broom takes his time and tells the story here with a graceful touch before unleashing with Bensonesque facility in the second half of the piece. The leader’s lovely, gospel-tinged “Eyes of Faith,” featuring Jordan’s pocket approach on the kit, is augmented by a lush string arrangement from Chicago rising star Matt Jones. “Having a full string section is another dream of mine coming to fruition,” says Broom.

Jordan also fuels an exhilarating Afro-pop take on “Get Ready,” The Temptations’ 1966 hit penned by Smokey Robinson. With Jordan’s snappy backbeat setting the pace and a complement of horns providing an authentic Motown punch, Broom sails over this one with typical fretboard finesse while percussionist Sammy Figueroa ignites the track with a burning conga solo.

Broom’s deliberate, faithful version of the 1967 baroque pop tune by Procol Harum, “Whiter Shade of Pale,” is relaxed, intimate and brimming with soul. Watkins switching to brushes here while Paterson lays down a velvety cushion of churchy organ tones before testifying on his B-3 solo. The trio’s rendition of “I Can’t Help It,” the 1979 Michael Jackson tune from Off the Wall (penned by Stevie Wonder), is paced by Watkins’ supple swing-funk pulse and sparked by smoking solos from both Broom and Paterson.
The collection closes on a mellow note with a soulful rendering of the David Gates tune “Guitar Man,” title track of the 1972 Bread album. Once again, Jones’ string arrangement adds luster to this ‘70s anthem while Broom blows over the top with fleet-fingered abandon.

What Broom does on Soul Fingers — having his way with ’60s and ’70s pop tunes — is no different than what Miles Davis and Charlie Parker did with Broadway show tunes back in the day. “That’s what everybody has done,’ he says. “It’s the very beginning of how jazz came into existence; the interpretation and re-interpretation of popular songs whether it’s Tin Pan Alley tunes, or even before that, folk songs from vaudeville and minstrelsy.”
In that sense, Broom’s take on “Ode to Billie Joe” and “Do It Again” is firmly in the tradition of Miles’ “Surrey With the Fringe on Top” or Bird blowing over “Just Friends” and “I Didn’t Know What Time It Was.” Singing the familiar melodies through his axe and blowing with authority on his solos is how he gets it done on Soul Fingers. “It’s obviously a jazz record but there’s something else going on,” says Bobby. “The tunes are absolutely swinging but in a bob your head, backbeat funk kind of way. That’s the way that I feel it. And I like that marriage.”

Bill Milkowski is a regular contributor to Down Beat and Jazzthing magazines. He is also the author of “JACO: The Extraordinary and Tragic Life of Jaco Pastorius” and co-author of “Here And Now: The Autobiography of Pat Martino,” both on Backbeat Books. 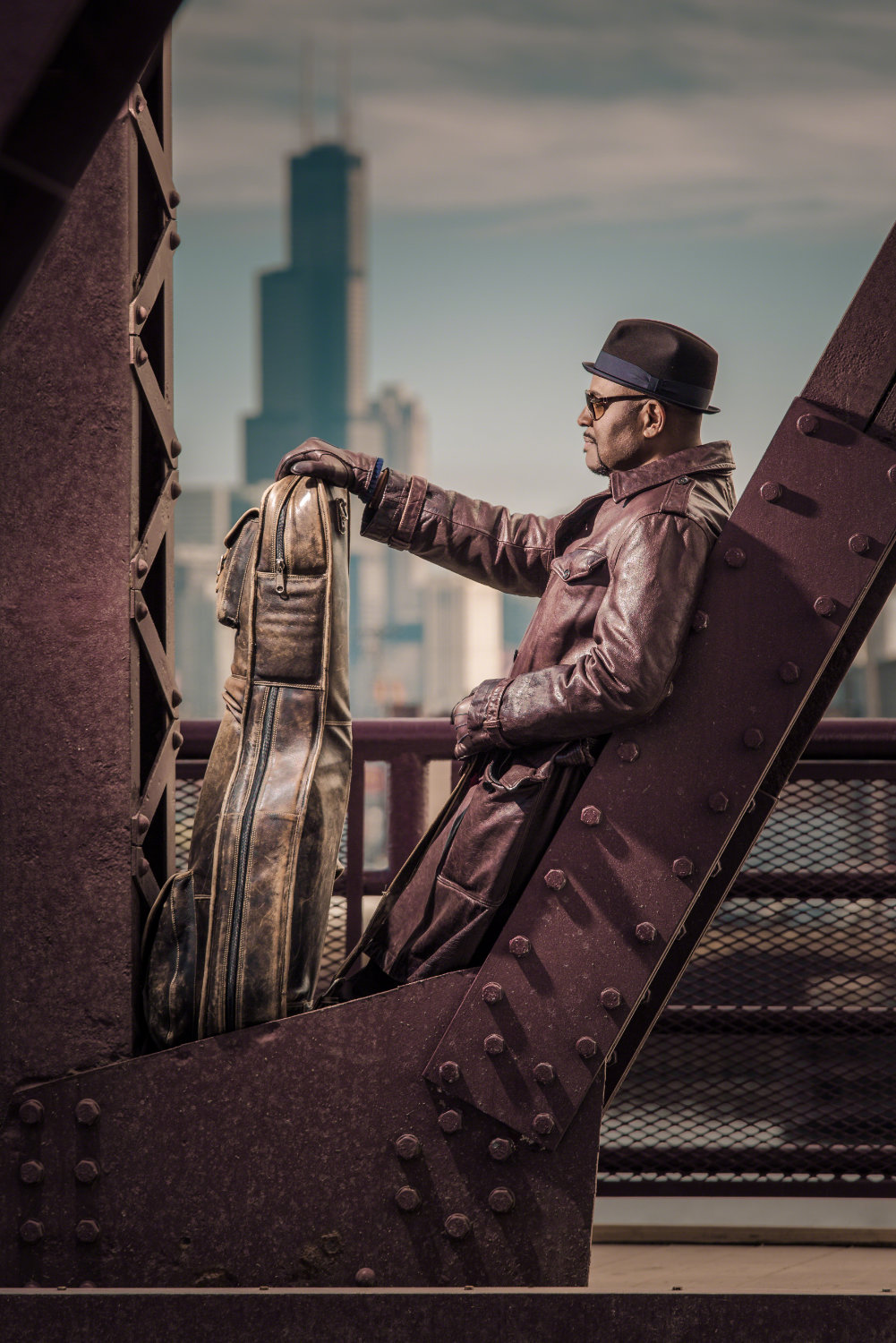