Live at the Philharmonie, Cologne 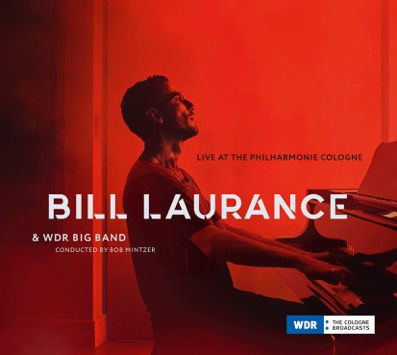 A charter member of the three-time Grammy Award winnig, internationally acclaimed group Snarky Puppy, voted Jazz Group of the Year in the 2017 DownBeat Readers Poll, keyboardist Bill Laurance has also been operating outside the confines of that wildly popular genre-bending jazz and funk collective. Beginning with 2014’s Flint and continuing with 2015’s Swift, 2016’s Aftersun and Live at Union Chapel and 2019’s Cables, Laurance has investigated electronica, mesmerizing modal jams, drum and bass rhythms, entrancing world music grooves and a variety of other moods and styles. His meticulously-crafted, sonically creative solo projects have reflected his interests in the classical music he absorbed at the University of Leeds, the jazz he grew up with at home in North London and the electronic music that has intrigued him in recent years. All of these diverse elements organically merge into a fresh new sound that is capturing the imaginations of a new generation of jazz fans. As the U.K.’s Jazz Journal put it: “If jazz is to continue to appeal to future generations then it needs people like Bill Laurance to renew its relevance.”

Some of Laurance’s most familiar compositions, like The Good Things from Flint and the title track of Swift, reveal his tendency to build from stark minimalism to rhapsodic crescendos while others like the compelling Money in the Desert and the expansive Ready Wednesday (both from Flint) carry a cinematic sweep. The funkier aspects of Laurance’s writing, as on Swag Times and the Brecker Brothers-ish Red Sand, bridge back to his work with Snarky Puppy. Fleshing out Laurance’s engaging tunes with a full complement of horns takes them to the next level.

Recorded in front of an enthusiastic audience at the Philharmonie concert hall in Cologne, Germany, and powered by the renowned 18-piece WDR Big Band under the direction of principal conductor Bob Mintzer (renowned tenor saxophonist, longtime member of the Yellowjackets and leader of his own Grammy-winning Bob Mintzer Big Band), this adventurous outing finds Laurance re-imagining previously recorded works on a much grander scale. “I always imagined these compositions to be played by an orchestra, and it’s a rare opportunity to have your music realized with a large ensemble of this caliber,” said Laurance.

In some ways an extension of Snarky Puppy’s orchestral collaboration with the Netherlands Metropole Orkest on 2015’s Grammy-winning Sylva (Best Contemporary Instrumental Album), or Laurance’s own expanded versions of his tunes on 2016’s Live at Union Chapel, which featured a core quartet augmented by three strings and French horn, this exhilarating outing is alternately serene and rhapsodic, simmering with understated minimalism one moment and bursting forth with opulent orchestral strains the next. From undulating grooves and meditative motifs that seduce the listener to engaging melodies, irresistible bits of funk and highly-charged crescendos, Live at the Philharmonie, Cologne defies easy categorization while never failing to enthrall. “With this project I wanted to utilize the WDR big band to reference as wide a spectrum of genres as possible; to find a new approach to the traditional big band sound,” he said.

Credit Mintzer, whose innovative charts have been played by college and professional big bands all over the world, with helping Laurance to realize his goal on this WDR outing. “I wanted to let him bring his voice to it,” said the keyboardist. “He’s written countless numbers of big band arrangements and the way that he brought this stuff to life is really wonderful. I’m often thinking on a grander scale in terms of arrangement, and this was a great opportunity to realize it.”

Added Mintzer, “I would say Bill’s music is definitely different when compared with other WDR projects I’ve done in that it contains influences not generally found in the band’s repertoire. I found the music to have a film music-like quality to it. There is a simplicity there that seems to appeal to a large listening audience. It is always a challenge to arrange for the WDR. I try to acknowledge the intent of the composer while adding my slant on orchestration through harmony, melody and rhythm to the mix. And with Bill’s music I tried to add color and orchestrational depth to the tunes using the beautiful ensemble work of the WDR.”

While Mintzer arrangers a majority of the tunes here, there are also some guest arrangers. The minimalist opener, The Good Things, (originally played on Flint as a trio with Snarky Puppy’s own Michael League on bass and Robert ‘Sput’ Searight on drums) is arranged for the WDR Big Band by Vellu Halkosalmi. The piece gradually develops from serene intro to an ecstatic crescendo, culminating in a blistering, Michael Brecker-esque solo from the WDR’s resident tenor sax titan, Paul Heller. The composer explains some of the source material for this evocative piece. “I love Brad Mehldau’s record The Art of the Trio, and there are moments of that which definitely come out here. I also listened to a lot of Radiohead as a teenager which is reflected in chords on the middle section. For the piano solo I wanted to reference Roni Size’s ‘Brown Paper Bag,’ a popular U.K. drum and bass track, but with the approach of Tony Williams during the Miles Davis quintet era: it’s a drum and bass groove within a more open, free jazz dialogue.”

Denmark Hill flows easily over a lilting Poinciana beat (Laurance is a huge Ahmad Jamal fan) while arranger Mintzer brings out new colors and textures with his warm arrangement for flutes and horns. Laurance delivers a beautifully lyrical piano solo here and is followed in kind by a lovely trumpet solo from Ruud Breuls. Mintzer adds an urgent tenor solo before the full ensemble returns to the buoyant, engaging theme.

Channeling the likes of Abdullah Ibrahim’s Water from an Ancient Well and Keith Jarrett’s Köln Concert, the expansive Ready Wednesday (originally on Snarky Puppy’s fourth album, 2010’s Tell Your Friends, and later appearing on Flint) opens on an introspective note before erupting into a turbulent, hard-charging section that features Laurance’s most harmonically provocative piano solo of the set. “It’s the song I’m most known for, yet it feels like the least commercial,” he said. “But I feel like it represents the full spectrum of styles I’m interested in, in one song.”

An expanded version of Swag Times (from Flint, arranged here by Mintzer) features another soulful solo contribution from the WDR’s resident alto sax burner Strassmayer. Drummer Hans Dekker, whose slamming backbeat fuels the track, is showcased traversing his kit with aplomb over some intricate contrapuntal conversation by the horns. And Laurance adds a persuasive Fender Rhodes solo near the end of this swaggering number.

The stately opening theme to Money in the Desert (arranged by Mintzer) is underscored by a military march. The piece gradually morphs into the kind of brash big band chart that Laurance remembers from popular tv themes of the ‘70s and ‘80s. “I was a fan of The A-Team when I was a kid,” he confessed. “And some of that may have made it in there.” He also cites one of his favorite classical composers, E.J. Moeran from Norfolk, England, as an influence in the mix. “I was lucky enough to conduct an orchestral piece of his at university called ‘Sinfonietta,’ which has a lot of folk influence in it. I found it to be the perfect balance of romanticism with a more challenging 20th century harmony.” Billy Test turns in a particularly funky Fender Rhodes solo here while saxophonist Heller once again steps up and knocks it out of the park with another robust tenor solo. The inspiration for the title of the piece was the juxtaposition of commerce in the middle of the desert that he encountered while flying into Dubai airport on the way to a gig in Japan.

Dekker’s sensitive brushwork sets just the right tone on the tender ballad Golden Hour (originally on Aftersun, arranged here by Mintzer). “That’s essentially about the fragility of things,” explained Laurance. “And about how things are more priceless when they don’t last forever. And that’s true of the golden hour. That golden light which only lasts an hour each day and then it’s gone.” Trumpeter Rob Bruynen turns in an especially beautiful solo on this number tinged with a slight sense of melancholy.
The lone swinger here, The Rush, features a brilliant trombone solo from Andy Hunter and has Laurance dipping into his Chick Corea bag on an outstanding piano solo.

Another minimalist number, Swift, inspired by the likes of Philip Glass and Steve Reich and arranged here by Florian Ross, builds to an invigorating Latin flavored section that features a spirited bass trombone solo from Mattis Cederberg. Altoist Karolina Strassmayer also contributes a potent solo while the horns provide a sweeping sense of uplift throughout this highly charged number. “It’s just one repetitive piano rhythm and everything else kind of dances around it,” the composer explained. “The use of the low horns helps create the epic, symphonic soundscape that I was looking for on this song. I prefer that wider, deeper brass sound.”

The dynamic, crisply-executed Red Sand opens with an intimate, exotic dialogue between Laurance’s piano and Bodek Janke’s tabla before the funky backbone of the piece is revealed. Johan Hörlen’s contributes a powerhouse alto solo to the mix while Mintzer kicks in a stellar tenor solo on this slamming Brecker Brothers-ish tune recalling staples like “Sponge” or “Funky Sea, Funky Dew”. Says the composer, “It was originally inspired by a Moroccan rhythm that I recorded on my phone in Jemaa el-Fnaa, the main square in Marrakesh. I took it home and recorded this melody over it. Then it was during the soundcheck at the venue that Bodek Janke, an incredible percussionist mentioned that he played tabla. We started jamming at the soundcheck and then decided to open with it in the concert. Previous to that, we had been starting the tune from where the drums come in. That’s the beauty of these collaborations — you end up making musical discoveries you weren’t expecting.”

Cinematic in nature with surprises around every turn of the page, Live at the Philharmonie, Cologne is easily Laurance’s most adventurous outing to date. — Bill Milkowski

Bill Milkowski is a longtime contributor to Downbeat and Jazzthing magazines.
He is also the author of JACO: The Extraordinary and Tragic Life of Jaco Pastorius

LIVE AT THE PHILHARMONIE, COLOGNE

all music arranged by Bob Mintzer except: 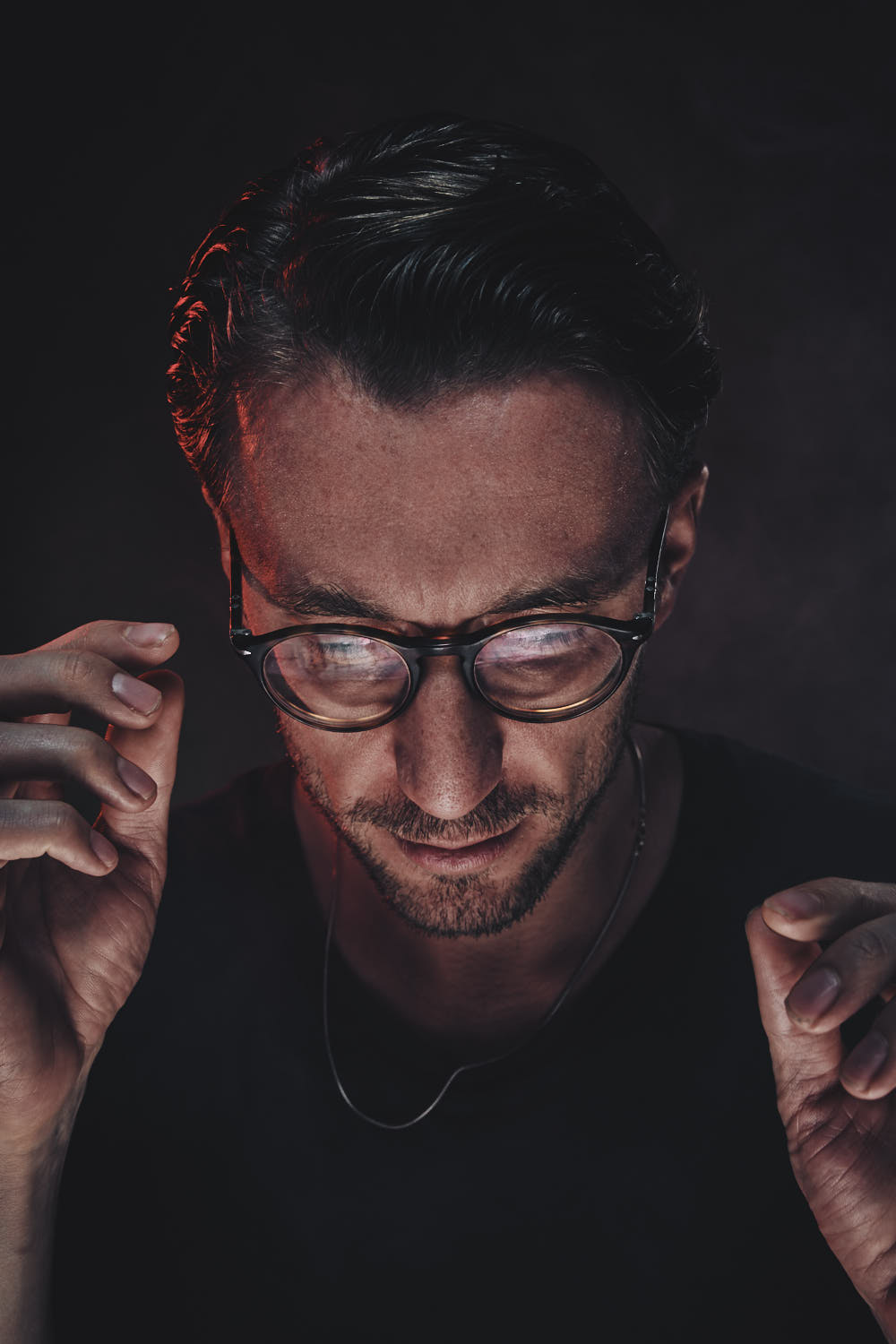 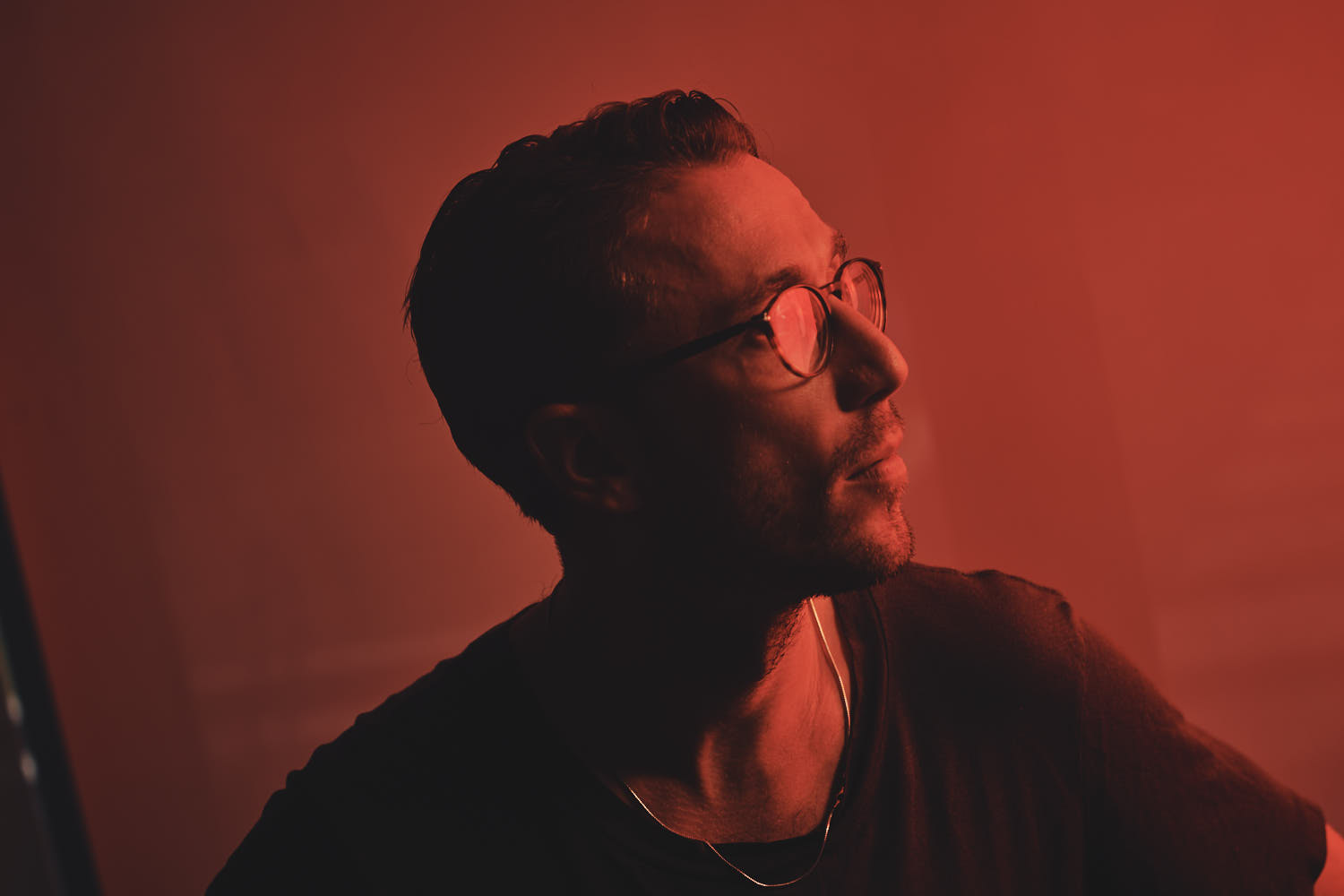 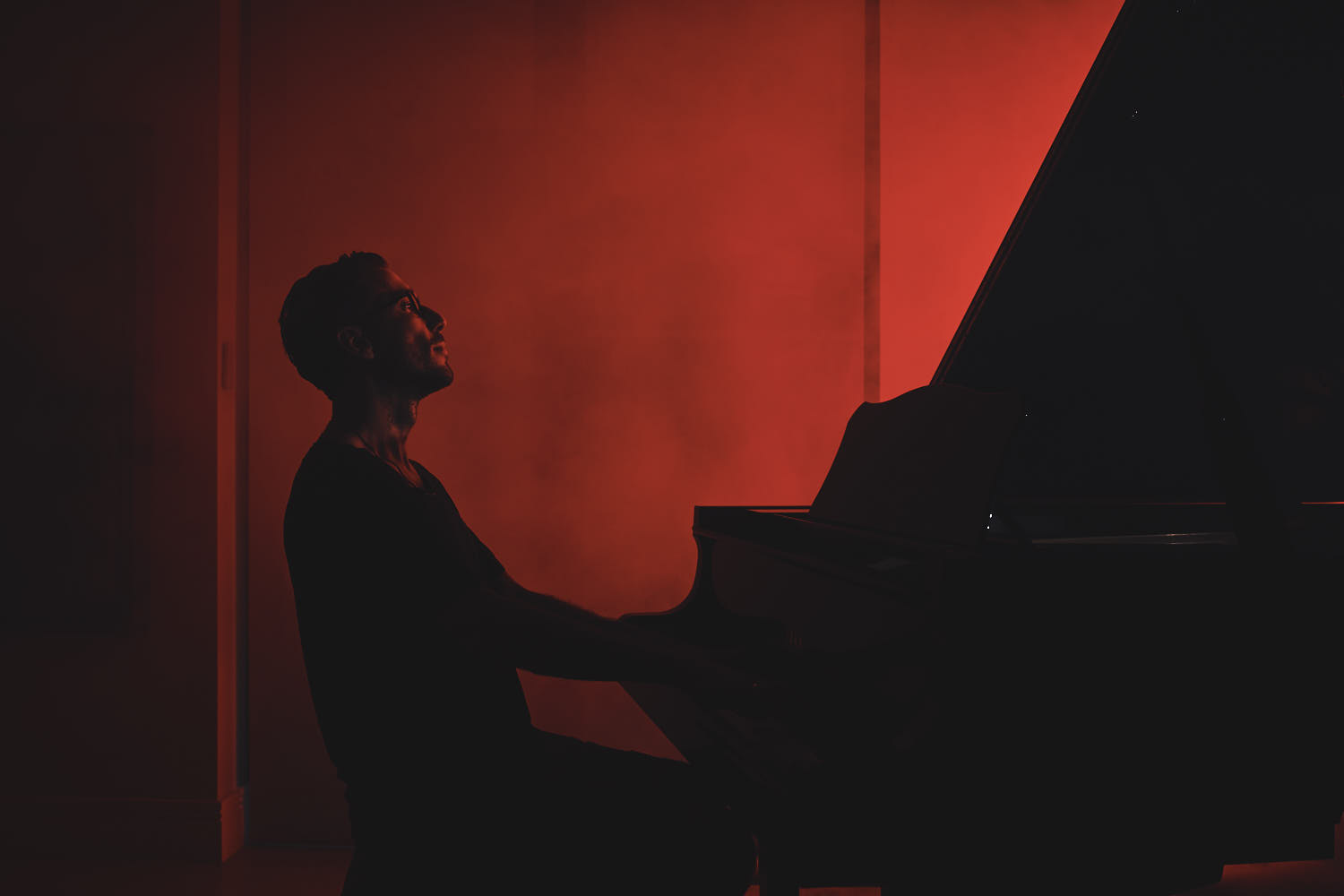