listen on iTunes or Spotify 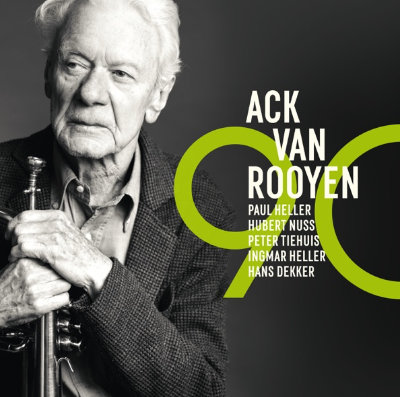 Play just one note and I know who you are. It is often the unique own sound of an instrumentalist that gives him or her away – not only in blindfold tests, where recordings by unnamed musicians are played and the audience, often musicians themselves, have to figure out the names of the artist and the composer. In the case of Ack van Rooyen this is an easy game, even for an amateur jazz-loving audience. His sound is so distinctive that a few seconds are sufficient to identify the artist without any doubt.
It is a warm sound with a touch of melancholy – aspects that also characterise the human being Ack van Rooyen. “Maybe it is all related. As a musician you have a particular sound, just the way you have a particular voice as a human. Performing music it quite similar to singing: You have got a distinctive voice or you haven’t. You can improve it, but you cannot really change it.“
The fluegelhorn is the ideal instrument for Ack. That’s what Jerry always used to say about is younger brother. While the sound of other trumpeters and fluegelhornists tends to deteriorate with age, he is still going strong even at the age of ninety. Nothing proves this in a more impressive way than his new album, 90.

On January 1st, 2020 Ack van Rooyen celebrated his milestone birthday. A few days later he did what jazz musicians often do: he celebrated the occasion with a concert with his friends and musician-friends. On that evening at the Bimhuis in Amsterdam one tenor saxophonist was present who had already celebrated Ack’s 80th birthday with him and who had recorded the CD Celebration on that occasion with him. The friendship – on stage and off stage – of Paul Heller and Ack van Rooyen goes back three decades. They got to know each other during a jazz workshop in 1985 and soon the older of the two became one of the most important mentors of the younger musician. They shared many important moments. Both have always had close contacts to the music scene of their respective neighbouring country, the work with big bands was an important part of their musical career and both are members of a special jazz-fraternity: From 1985 to 95 the already deceased trumpeter and arranger Jerry van Rooyen was chief conductor of the orchestra which Heller joined ten years after Jerry had left: the WDR Big Band.

90 presents a bi-national sextet – with three musicians from each of the two countries. The guitarist Peter Tiehuis performed - among others - in two big bands which also played an important role in Ack’s life as a musician: Peter Herbolzheimer’s Rhythm Combination & Brass and the Skymasters. Pianist Hubert Nuss has already participated in two recordings of the wind players (Celebration, Live & In Studio), the same is true for Paul’s brother Ingmar (Paul Heller, Kaleidoscope). The bassist is a member of the NDR Big Band. The percussionist Hans Dekker, Paul’s Dutch colleague from the WDR Big Band was also among the birthday party guests of Celebration.
The repertoire of 90 has been selected by van Rooyen and Heller (who is acting as arranger and artistic producer this time). It comprises pieces which they have regularly performed live over the last few years. “Canter No.2“ was written by the Canadian trumpeter and fluegelhornist Kenny Wheeler. In this version it is Ack’s tribute to his deceased friend and former colleague from the United Jazz + Rock Ensemble. The next number, the cheerful (almost carnivalesque) “D’r Lange Jan”, takes us to Ack’s home country: it is an old song about the Lange Jan. This 135 meter high chimney of a coal mine is the landmark of the former mining town of Heerlen. The song sports a Caribbean flair, arranged by the Dutch trumpeter and fluegelhornist Marc Huynen, with whom Ack has performed regularly over the years. Michael Legrand, who was a friend of Jerry van Rooyen and has worked with him repeatedly, has written “Papa, Can You Hear Me?” for the movie Yentl with Barbara Streisand as lead actress and interpreter of the song. “Brush It Up“ is one of the two compositions by Paul Heller on this album – with Hans Dekker brushing along. Edu Lobo’s “Pra Dizer Adeus“ was one of the repertoire pieces of the Rhythm Combination & Brass, which regularly featured Ack. The horn section intro of the arrangement is performed by Paul on the clarinet and bass clarinet (incidentally, Herbolzheimer also arranged the piece for the Manfred Krug Album Da bist Du ja from 1979 – and Ack van Rooyen was part of that line-up). The nostalgic “The Things We Did Last Summer” has a special place in Ack’s bio- and discography: This standard was his very first recording ever. In 1953 he travelled through Scandinavia with the Boyd Bachmann Orkest and recorded the number in Copenhagen. “En Yndig Og Frydefuld Sommertid“ is Ack’s tribute to the exceptional bassist Niels-Henning Ørsted Pedersen, with whom he has often performed and who enjoyed interpreting Danish folksongs with his own ensembles. “The Hague Shuffle“, a positive song with lots of groovy energy, is dedicated by Paul to his friend Ack, who was born in The Hague (Den Haag) and still lives there today. Jim Hall’s “All Of A Sudden My Heart Sings“ makes the heart jump – and the musicians follow the Bb flat major up (Ack) and down (Paul)…
The repertoire of 90 reminds one of several milestones in the career of van Rooyen.

In 1946 Ack was introduced to bebop when he and his brother Jerry performed for American soldiers in Indonesia. The GIs let them listen to their “v-discs”, recordings sent from home as moral support. In 1947 Ack and Jerry travelled to New York and experienced J.J. Johnson, Stan Getz, Fats Navarro and Erroll Garner live on stage at the Three Deuces club. Back in the Netherlands and together with the pianist Rob Pronk they founded the ensemble Rob’s Boptet and performed – bebop. Soon the opportunity arose to go to Paris – on invitation by singer and trumpeter Aimé Barelli, who had managed to lure the Gillespie Big Band to the French capital in 1948.. Ack spent three years in his orchestra, from 1957 to 60. “We had a great time, so romantic! It was a dream to live there! We had little money, but what more can you ask for with Bud Powell and Kenny Clarke living next to you on the same floor and all the American artists in the clubs. During the winter we performed in Paris and in summer in Monte Carlo. We had a splendid time.”
One summer evening in 1960 in Monte Carlo Ack van Rooyen was once more on stage with the orchestra of Aimé Barelli. Quite unexpectedly a guy from Berlin turned up and offered him a fixed contract to join the band of the SFB, Radio Free Berlin, which was then about to be established. The trumpeter agreed and moved to Berlin. The next six years he lived and worked there. In the mid-60s he was joined by his brother Jerry, who also relocated to the city on the Spree River. “Those were the golden days of radio broadcasting!”
In 1967 the trumpeter left Berlin and settled down in Stuttgart for eleven years. He had received an attractive job offer to join the dance orchestra of the SDR broadcasting station, but he would also have time to pursue other projects beside this bread and butter job. “That was actually the real reason why I moved to Stuttgart.” Van Rooyen made good use of the opportunity and performed – among others – with the Radio Jazz Group Stuttgart by Wolfgang Dauner and became a founding member of the United Jazz + Rock Ensemble, initiated by Dauner. The band’s albums were released by the musician-owned label Mood Records. Ack van Rooyen and his co-musicians therefore became pioneers in Germany of what is still a common practice: artists release their own recordings to keep control over production end exploitation rights.
Ack’s fame further increased by joining another jazz- and jazz-rock ensemble – Peter Herbolzheimer’s Rhythm Combination & Brass. Many of the band’s musicians he already knew well (e.g. Herbolzheimer and Jiggs Whigham) from performing with them in Bert Kaempfert’s orchestra.
In 1980 the trumpeter returned to Netherlands. He performed with his own ensembles, in a quintet with Ferdinand Povel (the saxophonist had also been engaged by Herbolzheimer before), in a duo with pianist Jörg Reiter and again and again with large ensembles – like the big band Skymasters or the Metropole Orkest.
He never lost his connection to the German jazz scene. Particularly with Paul Heller he worked together quite regularly since the late 1990s. The latest result of this cooperation is 90. Timeless straight-ahead-jazz at its very best.

“I have learned so much from all the people I have performed with throughout the years. Not only about music, but also about life itself. A nice way to study. I was lucky.”