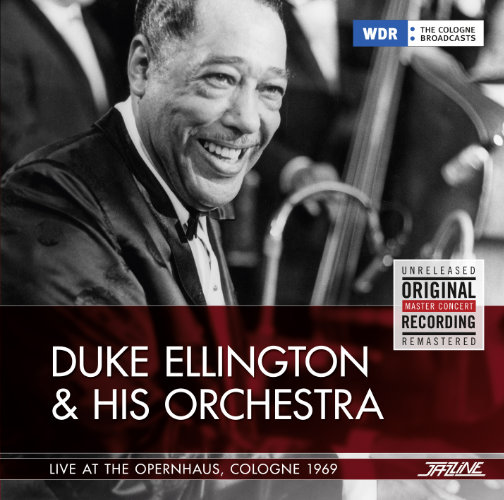 Live at the Opernhaus, Cologne 1969

"E as in all good things, E as in Edward, E as in excellency, E as in elegance! In short: E as in Ellington!" One of the many witticisms of the Duke.
It comes as no surprise that the grand seigneur of jazz with posh attitudes, whose aristocratic nickname seemed to be a fitting first name to many people, did hold court in a temple of high culture. Admittedly, the Cologne opera has never been a regular stage for jazz, but there have been exceptions – evenings of jazz, reserved for the celebrity-improvisers.
After 1969 Ellington also performed at the opera in 1970. Promoter Gigi Campi also organised a "Battle of the Big Bands" (including the big bands of Kurt Edelhagen, Slide Hampton and Mike Westbrook) in the context of a Week of Jazz in Action. Closing event of the "Week of Jazz" was a concert by the Kenny Clarke / Francy Boland Big Band, with the guest-stars Carmen McRae and Dizzy Gillespie. In 1972 Oscar Peterson performed a midnight concert on invitation by Campi. Three years later it was again a pianist, who brought the Cologne opera to the attention of a global jazz-community for the first time with his Cologne Concert, Keith Jarrett.
1969 was a special year for Ellington. On the 29th of April he celebrated his 70th birthday in his hometown Washington, not on any stage but at the White House, as documented on the album 1969: All-Star White House Tribute to Duke Ellington (with members of his band but also guests, such as Jim Hall, Dave Brubeck, Paul Desmond and Gerry Mulligan). Already Ellington's father had been admitted to the White House, as a butler … On being awarded the Presidential Medal of Freedom by president Richard Nixon, Ellington said: "We speak of freedom of expression and we speak of freedom generally as being something very sweet and fat and things like that. In the end when we get down to the payoff, what we actually say is that we would like very much to mention the four major freedoms that my friend and writing-and-arranging composer, Billy Strayhorn, lived by and enjoyed. That was freedom from hate, unconditionally; freedom from self-pity; freedom from fear of possibly doing something that may help someone else more than it would him; and freedom from the kind of pride that could make a man feel that he is better than his brother."

How could it have been any different: Wherever the Duke was on stage that year the performance was announced and marketed as his "70th Birthday Concert" (e.g. the concerts on 25th and 26th November in Bristol and Manchester, released by Solid State). Paris organised a birthday party for him and also the Berlin Jazztage celebrated him – and not only with him: The opening night on the 6th of November was themed "Piano for the Duke", with homage-performances by Joe Turner, Lennie Tristano, Joachim Kühn, Thelonious Monk and Cecil Taylor. The third evening of the festival was titled "Tribute to Duke Ellington" and presented the Newport All Stars and – naturally – the master's own orchestra. For the playbill he wrote the following sentences, once more proof of a well-planned charm offensive: "Awards, acclaim, honorary doctorates, and keys to cities clearly demonstrate that people are not only good, gracious and generous, but that somebody must have been listening. In response we say: Could there be anyone in the world more profoundly appreciative of the sensitivity and good taste of your eardrums? Thanx."

Two days after the concert in Berlin the next destination of the tour was Cologne. For jazz fans in the Rhineland the 10th of November was a feast day, one day before the rest of the county celebrated the start of carnival. Excitement was great, although not comparable with the one on the occasion of an Ellington concert in 1950, when the report in the Rheinischen Post on the concert in the Dusseldorf Apollo-Theatre reads like a story on a pop concert: "The frantic applause escalated into a hurricane, the audience was getting carried away. Approving whistles, yells, sobs, stamping, interjections in unheard of numbers hailed down on Duke Ellington just as he himself lavishly scattered around his syncopations. The ecstasy can only be compared to the trance experienced in certain sects." (quoted after Hoffmann 2000, in: Duke Ellington und die Folgen, p. 90)
The magazine Hör Zu announced the Germany-tour of 1950 with these words: "Some utter his name in horror – others ecstatically close their eyes and are all ears when he brings in the musicians with famous precision. However, all of them – friends and foes of jazz – agree on this: Edward Kennedy Ellington – aka Duke, is one of the most exciting musicians of our time. Now the Duke will come to Germany for three days. The NWDR, the SWF and the Bavarian Broadcasting Association want to record his music on tape." (quoted after Hoffmann,  p. 76)
Nineteen years later the WDR recorded the Duke in Cologne. This performance is now available on CD. The guest soloist of the tour of 69 was the organist Wild Bill Davis, who occasionally – just as Billy Strayhorn, who had passed away two years earlier – also acted as second pianist. He was also present when the Duke used a trip to Cologne in 1970 for some studio recordings (recently released as Duke Ellington – The Conny Plank Session/Grönland). The band was evidently in top form. Although the repertoire was drawn almost exclusively from classics, there were also some surprises included – e.g. "Take The 'A' Train" performed as a jazz waltz in the beginning. Climaxes were, among others, Davis' organ-feature in "Satin Doll", accompanied by Cat Andersons stratospheric high-note-show-interludes, the roaring "Up Jump" with an unleashed Paul Gonsalves – announced by the Duke as "tenor saxophonic calisthenics" – and last but not least the pleasantly singing solo of Jonny Hodges in "Black Butterfly", a touching highlight performed by the alto saxophonist, who was to pass away half a year later.
Duke Ellington died in 1974. During the last years of his life he had once again taken up a project which had occupied him for decades and which should remain unfinished: "Queen Pie", a jazz opera. And who knows: If he would have managed to finish it, maybe it would have also been performed in Cologne – in the opera …