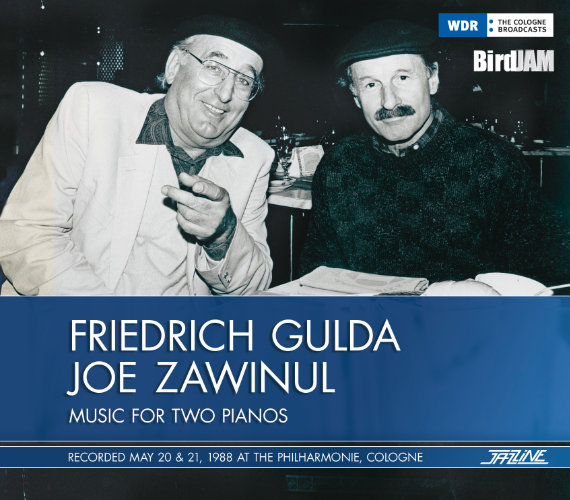 The dramaturgical sequence of today’s programme takes us deep into the realms of Austrian tradition, right back to a popular old pilgrims‘ song written by Joseph Haydn and modified by Johannes Brahms. But why this as a duet with Josef Zawinul, the star of the international rock-jazz scene? Because he, just like myself, is ingrained in the ancient Austrian tradition. He is an archetypal Viennese musician through and through, who did and does things similar to my own in a style that only he can produce: This means that he opened himself up to international music - not in order to deliver himself up to it, but rather to master it and yet never forget what he owes to his own musical roots.

Hence the reason why, in my opinion, he is the only true partner for Haydn and Brahms. The programme will then logically come to a close with one further variation, namely "Variations for Two Pianos and Band”, composed in 1966 and originally performed in Berlin in the same year, also including Josef Zawinul as partner. A waltz of slight Viennese character is modified to form largely jazz improvised variations ("choruses”) in various tempos and times. It shouldn’t be too much trouble for trained ears to forge mental links to Brahms, the master, and beyond. But such a play of thoughts is not necessary to enjoy the piece. You should simply hold onto what you like: Enjoy!

VARIATIONS FOR TWO PIANOS AND BAND is an occasional piece of mine. The occasion was however a particular one: After a long time - far too long - I met up again with my old friend, colleague, fan, strong critic, fellow supporter and pal from long-gone art-club days. Joe (Pepi) has since moved up to the top echelon of international jazz pianists. In an almost perfect setting, the variations provide both soloists with ample opportunity to revive the piece often practiced on two pianos in days gone by and to pull out all of the jazz piano stops. The piece is of course a waltz. What else could be expected of two men from Vienna? Joe begins with a free formation of the piece, then I come in with a rhythmic formation before the variations in tempo sequence - medium (3/4), quick (4/4), slowly (4/4), quick (3/4) plus Coda (»tag«) – and final reminder of the piece take their course.

Friedrich Gulda was born in Vienna on 16th May 1930, studied piano and theory at the musical academy and quickly made a name for himself as a concert pianist. In 1946 he won first prize for piano at the International Music Competition in Geneva and began an international career that took him to all of the major music centres of the world. The traditional concert business with its antiquated character and mere reproduction of works from previous eras proved to be insufficient for him in the long run; he became heavily involved with jazz, made appearances as a jazz pianist and composed in this style, whose original improvisatory makings and creative opportunities particularly appealed to his multi-faceted talent.

In addition, Friedrich Gulda‘s intensive occupation with jazz enabled him to make particular congenial use of interpretational freedoms in "classical” piano music by allowing ornaments, variations (modified recapitulations, as it was known in his day), "distinct” pieces and the old Rubato (the independence and ad-hoc drifting apart of melody and accompaniment) to flow directly into his piece in an exemplary manner.

The collection "Play Piano Play”, dedicated to Yuko Gulda, contains practice pieces which not only fulfil a didactical purpose, but are also fun at the same time for both the person playing and the listener. Gulda himself points out that individual movements can be liberated from the collection in order to be used as concert or encore pieces. Improvisatory changes are consciously demanded, are bound to occur as a result of the occupation with the piece and are Gulda‘s actual aim in his piano pieces: "The purpose is to create a genuine musician from an academic key presser."

From the seventies (from Friedrich Gulda – The Wanderer Between Worlds, page 15)

Josef Zawinul was born in Vienna on 7th July 1932; at the age of five he began to play the accordion; he studied piano and violin at the Wiener Konservatorium (Conservatory in Vienna). In the early fifties he made his name through his work with the Austrian All Stars, Friedrich Gulda and the Fatty George Band. A scholarship in 1959 enabled him to study at the Berklee School of Music in Boston (USA). After a few weeks in Boston he appeared with the Maynard Ferguson‘s Birdland Dream Band. Following that, he accompanied Dinah Washington (Queen of the Blues) for two years. After that he formed a 10-year partnership, including 25 LP recordings, with Julian "Cannonball" Adderley’s world-famous combo. Five major records with Miles Davis, including many self-compositions, were also produced during this time. In 1971 he founded the super group "Weather Report” with Wayne Shorter. This band was voted top band in the world for 15 years in the International Critics Poll of Down Beat magazine. In 1987 he founded "The Zawinul Syndicate”, which still tours the world today. The International Down Beat Critics Poll has voted him the world‘s best keyboarder of the year 33 times.