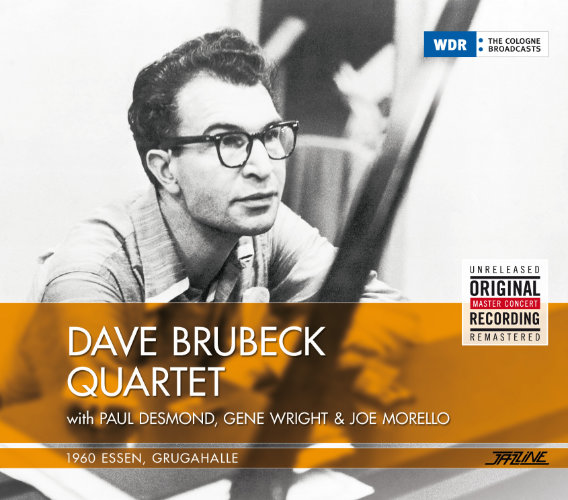 The band that would go down in history as the "classic Brubeck Quartet": Dave Brubeck, Paul Desmond, Gene Wright, Joe Morello, was formed in 1958, two years before the Essen show (once the rhythm section had been changed). The group knew how to unite intellectual with commercial success and quickly became the house band of the universities and colleges. This helped give the pianist the image of an academic. The use of counterpoint and the occasional twelve-note also played a part: it is he who brings jazz to educational establishments – in the beginning hardly for missionary reasons.

Hoping to keep her restless husband in California Brubeck's wife writes letters to all nearby universities and colleges on the west coast. Her wish is fulfilled: the invitations roll in, and the Dave Brubeck Quartet conquers new territory. The titles of the records tell of the matriculation of jazz: Jazz Goes to College, Jazz Goes To Junior College, Brubeck on Campus. The academic audience follows beyond the auditoriums - to this day. Brubeck wants this chance but he cannot anticipate that it paves the way for a boom in jazz educational theory. He is thanked for it - even in this country: In 1994 Dave Brubeck receives the honourary doctorate of the University of Duisburg (not forgotten however are the excursions the four made, which departed from the image of white academia: the album with the black Blues singer Jimmy Rushing and their interest, at the end of their successful career, in Mexican folk songs).The Essen Grugahalle exuded anything but an ivory tower atmosphere. The gigantic venue was officially opened on the 25th of October, 1958. Three days later, Bill Haley & his Comets played after Kurt Edelhagen had opened (sic!) – a concert that would go down in the annals on account of the tumults of the youngsters, and which made the venue “at one blow” famous (the same happened in Hamburg, the riots reached their climax at the legendary concert at the Berlin Sports Palace). Half a year after Haley appeared the first Essen Jazz Days took place in the Grugahalle.

The programme of the second festival on the 2nd and 3rd of April, 1960, was star-studded: the Michael Naura Quintet, Helen Merrill, the Coleman Hawkins Quartet, the Oscar Pettiford Trio, Quincy Jones and his Orchestra, Maxim Saury and his New Orleans sound, Peanuts Holland, Champion Jack Dupree , Stephane Grappelli, Muggsy Spanier and the Dutch Swing College Band.

The euphoria, which greeted the pianist (the secret star of the band, the soulful Paul Desmond), was especially big in Germany – and the recording in Essen documents this impressively: More than 12,000 visitors in the huge Grugahalle went crazy. Michael Naura - at that time leader of one of the most popular jazz bands in Germany, with which he had opened the Essen Jazz Days - describes the musical creed of a growing fan base, the Brubeckianer: "we were almost like a sect, like our model, who lived in a bebop-free habitat. In our Brubeck enthusiasm, very German, very middle-class, we avoided the jazz of black Americans; too hectic, too confused, too aggressive. If Brubeck, pupil of Milhaud, played melody bliss, we happily closed our eyes. Even when Brubeck played more complicated compositions, when the rhythm became gouty, we held to him. We almost sung: A Mighty Fortress Is Our Brubeck. '"

The 39-year-old pianist appeared directly afterwards with the Oscar Pettiford Trio, which had presented the tenor saxophonist Coleman Hawkins as a guest in its second set (the recording appears in the context of this series of CDs). Karl-Heinz Nass wrote in the May issue of Jazz Podium: “To let a quartet appear in the programme a second time, and in almost the same constellation would have been a disaster and boring, had it not been the very different, wonderful Dave Brubeck Quartet." He praised the band and each individual player, culminating in a remarkable statement about Joe Morello:" „With him even a percussion-solo is a pleasure“; a reference to the drum feature in "Sounds of the Loop".

"Blue Rondo a la Turk", already in the title, makes a play on the link to three cultural elements: on the coexistence of Blues orientated jazz improvisation, a rondo form inherited from classical music and a 9/8 tact borrowed from Turkish folk music. The band had recorded the piece the summer before for an album that would become a landmark, Time Out. The real hit of this LP doesn’t appear in the repertoire in Essen: "Take Five", a long-runner, which Brubeck subsequently couldn’t afford to remove from his repertoire.

Event without competition in Germany. Only when the city couldn’t make up its mind to financially guarantee the high-class festival, did Ralf Schulte-Bahrenberg, a native of Essen, move on; to Berlin, where the festival has survived for a few decades.