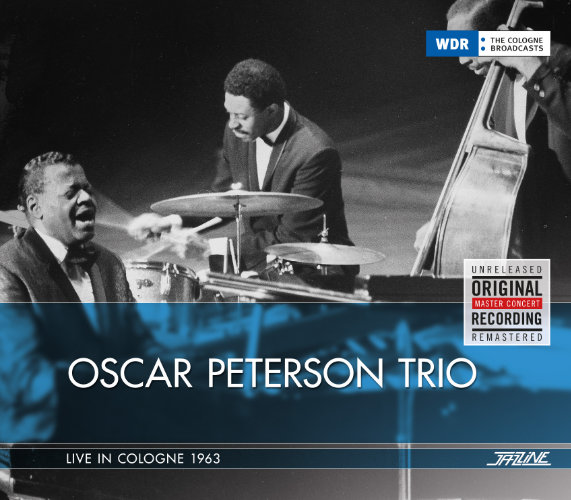 Almost to the day two years earlier, the Oscar Peterson trio had already performed on the same stage (also a WDR recording, released on Jazzline N 78004). And a large part of the audience, which had been present then, returned to the Gürzenich on April 27, 1963, remembering the sublime previous concert. They did not come primarily to hear a new repertoire, (although the quite bluesy album Night Train, which was released early in 1963 and should become one of Peterson's most popular recordings, might have attracted one or the other especially) as tours in these days were less focused on performing newly recorded material live on stage, as it is the case today. Moreover, the repertoire could change substantially from performance to performance. No, one wanted to experience the sweeping swing of one of the most outstanding piano-virtuosi in the world of jazz. Not least was the audience eager to hear how the trio had developed since last time.

In hindsight, not only fans of the Canadian heavy weight rank this triumvirate with Ray Brown and Ed Thigpen as his best ever. Over the years, this line-up developed a level of unity, verve, drive and yes, perfection (a term often used in connection with Peterson), as it was never before and never after achieved by any of his other trios.

The pianist and the bass player had performed together for the first time in 1949 at Carnegie Hall and went on tour afterwards: "Our problem was that, when the two of us walked in, most club owners immediately said, ‘for all that money I am paying I want to see a full big band on stage!' For an organizer in these days everything above 100 dollars was a lot of money! And at some point Norman Granz asked: ‘Why don't you do yourself a favour and get a third man?!' We did just that and got the guitarist Barney Kessel on board. This is how my first trio with two Americans came into being: together with Barney und Ray."

Going on concert tours was not Kessel's cup of tea and he left the trio after one year. His successor was Herb Ellis: He stayed for five years after all – interrupted by a break due to illness, during which Kenny Burrell stood in for him. The constantly increasing demand for concerts in ever larger halls made Peterson and his future manager Granz think about new line-ups: Instead of a chamber music like instrumentation with piano, bass and guitar they opted for the piano trio – and hence for an acoustically way more prominent percussionist. Peterson, Ray Brown and the new third man Ed Thigpen opened a completely new chapter in the band's history, which was later outlined by the pianist in the following way: "Six years of incredible music".

Thigpen (nicknamed "Thags") was known for his brush work and the band was able to make artistic use of it: After a while the percussionist would switch from brushes to sticks and triggered what Peterson called "the steaming zone" (quite often accompanied by Brown's request "Come on, Thags, let's tighten him up!").

Also the audience in Cologne could enjoy the anything but mechanically performing instigator, who inspired the already dynamic bandleader even more (and not only by a breakneck speed, which the trio only displayed in "Place St. Henri"). Nevertheless, there were probably also disappointed concertgoers at the Gürzenich, just as Dieter Zimmerle (editor of the magazine Jazz Podium) perceived one, a few days earlier at Peterson's performance in Stuttgart: "Who stalked out of the concert hall and revealed his alleged progressiveness by the casually expressed verdict ‘not-the-latest', meaning: Nothing new, I have heard it all before."

To begin with, criticism of that sort was not new in the case of Oscar Peterson. Again and again (until his stroke in 1993) he was accused of an "emotionless performance", overemphasis of technical elements, a lack of individuality and a habit of repeating himself (and connected to that, to release too many albums). Zimmerle was certainly not the only one who, with the help of arguments – and not only from the perspective of a "fan" – argued against that view. Especially remarkable is that in the course of his review of the concert he worked himself up about the mercantile zeitgeist and wrote an almost philosophic text about it:

"Even if in this time of mass produced music – especially the sort marketed by the so called ‘music industry' – a large proportion of it inevitably has to be trivial, this does not justify a collective criterion for grading performance, which would allow - in the era of automation - to mechanically test the aptitude of music as an article of daily use. These days, the term music is widely interpreted, whereby the authenticity, therefore the close contact with humanity, is pushed into the background in favour of its value as a commercial product." He also stated that the pianist was not the sort of guy who sold himself cheaply but gave one's all, especially during live performances – "not as a technician but as a musician". Zimmerle ended his review not without a pointed remark aimed at the faction of Peterson-critics: "Concertgoers who left after the performance delighted and happy are ahead of those, who brushed it aside with an overbearing, flouting smile. Since dissatisfied people are not to be envied and certainly not to be admired."

The performance at the Gürzenich did its bit for the fame of the pianist and the affinity of the German jazz-public towards him should even increase further: Only a few months later, in the autumn of 1963, Oscar Peterson met SABA-producer and soon-to-be MPS-founder Hans Georg Brunner-Schwer at a private party in Villingen-Schwenningen in the Black Forest. In the following years he recorded some of the best albums of his entire career for Brunner-Schwer.