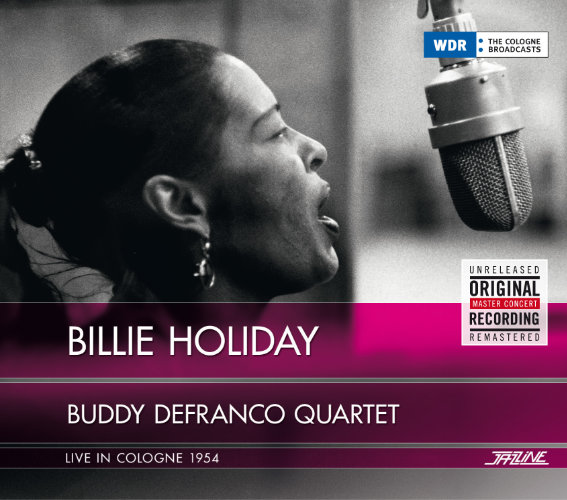 1954 had quite some jazz celebrities in stock for Germany: Ella Fitzgerald, Sarah Vaughan, Oscar Peterson, Illinois Jacquet, Coleman Hawkins as well as the big bands of Woody Herman and Count Basie, among others. The year had already started promisingly.

In January twelve US-American musicians travelled to Europe together. An "intimate" alternative to Jazz at the Philharmonic with its sporty battles of rivalling soloists. The title of the tour: Jazz Club USA, named after an identically titled show of Leonard Feather at radio station Voice of America.

Feather himself pursued several activities in the jazz business: he was a critic, presenter, publicist and editor, pianist, composer, producer and impresario. In all his activities he was inspired by his intention to further the cause of jazz as an art form. He shared this sense of mission with the initiator of JATP, Norman Granz, but was less driven by business acumen and sent his own miniature festival on tour (and above all, acted as presenter on stage): a trio with the singing pianist Beryl Brooker at its centre, whose establishment Feather had co-fathered; another trio led by vibraphones player Red Norvo; the quartet of clarinettist Buddy DeFranco and finally, Billie Holiday. She had only brought her regular pianist Carl Drinkard along to Europe. Initially it was unclear who would form the rhythm section as three bassists and two percussionists refused to work with Lady Day. Their explanation: she is difficult, unpredictable and her quality of performance varying. Finally, at the last moment two were willing to "take the risk": Red Mitchell and Elaine Leighton. However, it was already too late for rehearsals.

The programme followed a well planned dramaturgy. The evenings were opened by an all-female formation, the trio formed by Beryl Booker, Bonny Wetzel and Elaine Leighton. Subsequently Red Norvo, Jimmy Raney and Red Mitchell went on stage. After a short break they were followed by Buddy DeFranco, Sonny Clark, Gene Wright and Bobby White. However, the main act of the evening, the performance of Holiday, was not the end of the concert: The evening finished with a session of Holiday, DeFranco, Norvo, Raney, Clark (who performed the first piano solo, the second was played by Booker), Mitchell and Leighton. This schedule was more or less retained during all appearances. Holiday’s first European tour started on the 11th and 12th January in Stockholm. Initially, Jazz Club USA was ill-fated: at first several musicians refused to accompany the star, then there was no time for rehearsals and finally they were almost too late for the opening concert in Stockholm as a snow chaos forced the plane to land in Copenhagen and the musicians had to continue by train. The tour was overloaded with appointments and there was hardly any time for rest. After a week in Scandinavia and before the company performed in Holland, France and Switzerland, they played ten concerts in Germany, including one at the US-army base in Baumholder.

Clarinettist Rolf Kühn, who was among the audience at Berlin’s Sportpalast, wanted to see the man who was announced as "the new king of the clarinet" in the programme. "I absolutely wanted to get to know Buddy DeFranco and I knew when he was scheduled to arrive at Tempelhof airport. As I did not speak any English, I brought a friend to interpret. We drove to the airport and approached him. He actually joined us in my old VW and we dropped him at his hotel. After the show I invited him for dinner at the Maison de France. We stayed there until two o’clock in the morning when we drove back to my place and I played some of my stuff, which he wanted to hear. He recommended me to come to America. This was the catalyst." (from: Maxi Sickert "Clarinet Bird. Rolf Kühn – Jazzgespräche", p. 46) In 1956 he actually did emigrated to the USA and shortly afterwards took over from DeFranco in the Tommy Dorsey Ghost Band. Kühn lived on West 87th Street in New York in a "musical house": he himself lived on the third floor, Billie Holiday on the ground floor and Dayton Herzog, son of composer Arthur Herzog Jr., who did compose songs such as "God Bless the Child" and "Don’t Explain" together with her, dwelled on the second floor. The clarinettist often experienced the singer drunk and as a victim of physical abuse.

On the eve before the concert at the Messehalle in Cologne, Holiday & Co. performed in Dusseldorf. As Feather got to know that the pianist Jutta Hipp was appearing at a club in nearby Duisburg, after the concert he and several of his musicians drove to the Boheme, which had been established by Gigi Campi. Lady Day also joined them. However, her husband, who was known for his physical violence, had locked her up in her hotel room and she had to flee via the fire escape stairs. After the trip to the Boheme he did beat her up badly and Holiday had to appear on stage wearing dark sunglasses in Cologne the following evening. The repertoire included a song written by her entitled "I Love My Man"(aka "Billie’s Blues"). Its lyrics include the lines: "I’ve been your slave/ Ever since I’ve been your babe/But before I’ll be your dog/I’ll see you in your grave". And in the song "My Man": "He isn’t true/He beats me, too/What can I do?/ Oh, my man, I love him so..."

The singer was battered by her disastrous life but was nevertheless (or maybe just because of that..?) able to move her audience. On the then 38 year-old singer ("with the face of a 50 year old" as critic Werner Burkhard had put it, who had seen her a bit earlier at the Ernst-Merck-Halle in Hamburg) concertgoers could read in the programme: "Billie Holiday turns the most mundane songs into artworks of an intensity which makes her one of the greatest artists of our time. "