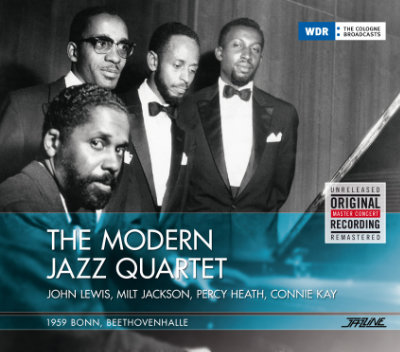 “I replied, slowly getting concerned that, after five years of drawing room jazz from the 18th Century, I no longer would be able to play the drums again the way I wanted to.“

This was the reaction of the first MJQ's drummer, Kenny Clarke, to the request of John Lewis to stay in the band. He increasingly regarded this discreetly swinging chamber ensemble as a corset, which only strengthened his long cherished wish to leave America. Lewis tried to hold him with luring fees - in vain. With Connie Kay as a successor the group would be constituted, without further personnel changes, and would survive for a quarter of a century.

It is not without of a certain irony that the band, which is commonly regarded as the „longest-lasting band of jazz“, always faced dissolution and its vibraphonist thought in the early 50s of quitting. A not unimportant charm of the MJQ lay in the artistic tension between the vibraphonist Milt Jackson and the pianist Lewis; a tension that was sometimes not limited simply to musical differences. What these two very different musical personalities embodied in miniature connected the quartet as a whole: a peculiar meeting of virtually classical form consciousness and black Blues feeling. They were four serious and seriously musical men who satisfied both the musical values of Europe’s musically socialized middle class and the desire for Afro-American "exoticism" (in mild doses).  The pianist and later NDR Jazz editor Michael Naura (who himself led a band with vibraphone) formulated the fascination of the MJQ so: "The Modern Jazz Quartet is the antidote to the somewhat derogatory dictum that jazz is noise. It has introduced a grotesque European component, namely, harmony...in a tuxedo - I thought: what is this?? A strange dream!"
Germany was charmed by the four men. No country in the world celebrated the band in the '50s more. The reception, in the course of the increasingly politicized '60s changed - culminating in the Berlin Jazz Festival in 1965 when the audience won a worldwide reputation for it’s boos.

Immediately after the Bonn concert Dieter Zimmerle noted for the Jazz Platform:"The reviewer is, as so often, in a strange situation. He critically discussed the concept of John Lewis in times of elation for the MJQ and exposed himself – to put it mildly – to the surprise of many jazz fans.  But now that the MJQ has been branded 'old hat', there is surprise if he is not skeptical towards Lewis. He knows that with Ornette Coleman, with whose music he has already dealt, a new star has risen, which independent of his actual qualities, has in store for him the same "Hosanna" and "Crucify him” of the infected crowds.”

The frame, the ambience fitted: a classical temple of the Muses, the Beethoven Hall. Built at the initiative of Franz Liszt during the first Beethoven Festival in Bonn in 1845, demolished as a fire hazard, newly built in 1870, for the 2nd Beethoven Festival, it was destroyed in 1944 during a bombing attack. The present building was completed in 1959.

While the Modern Jazz Quartet was still playing some men in nearby Cologne, all habitués of a place which had nothing in common with the Beethoven Hall: the Kintopp Saloon (no place for "drawing room jazz"), one of the first student bars in Cologne where there was jamming and where many members of the Edelhagen band hung out, planned a short trip to Bonn. One had heard of the concert of the MJQ and, in the knowledge that the musicians would spend the night in Cologne some cars had driven to fetch the MJQ after the end of the performance. The whole thing was delayed because the band had to play one more title for an American TV station in the already empty Beethoven hall. Friedel Doetsch, who later opened the jazz bar Metronom on the Zülpicher place, took Percy Heath with him in his station wagon, along with his bass. And what everyone had hoped happened: the U.S. stars jammed in the saloon - except for one: John Lewis, who preferred to go to the fashionable Dom Hotel, with the remark: that he was "too old" for it...