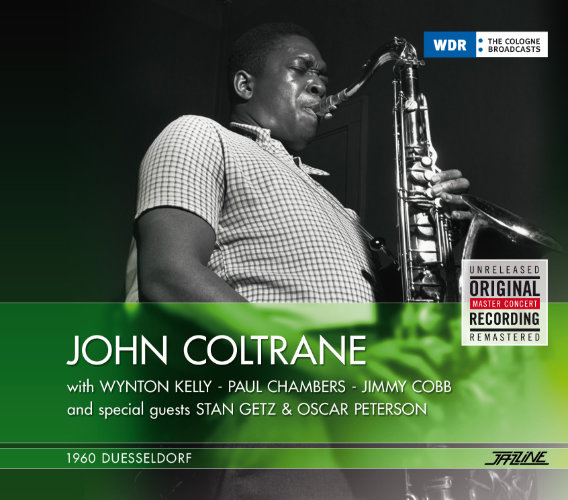 The John Coltrane Quartet. An accurate description, as long as one regards a saxophonist as a quasi "natural" leader of a group with an accompanying piano trio. But a band of this name only arose the following year with McCoy Tyner, Jimmy Garrison and Elvin Jones, all of whom changed the course of jazz history.

Another "John Coltrane Quartet", which wasn’t his, appeared in Dusseldorf. The pianist and the rhythm section were, in those days, in the service of Miles Davis. And the trumpet player should have appeared – under his own name (and with Coltrane). That didn’t happen. Why not?

The Davis Quintet is at the time on European tour. A trip which shows that the musical understanding between the Black Prince and his sax player had not only cracks, their different ideas made a separation inevitable. Coltrane appreciates the unusual leeway granted him by Davis. “I've been so free here, you know,...almost anything I want to try I am welcomed to do it, you know!” However, one cannot detain travelers. During the tour of Scandinavia his desire to leave the band grows. Only reluctantly does he fulfill his engagement, in silence and disgruntled. When a Swedish broadcasting company presenter informs him, at the end of an interview, that the Davis concert will recommence, Coltrane can audibly be heard to sigh. The saxophonist hardly joins in when themes are played; only in the Soli does he seem to revive.  His improvisations become more complicated and longer; for some, too long. Miles Davis advises Coltrane to sometimes take the saxophone from his mouth; unsuccessfully. Impatient and listless Coltrane finishes the tour. Back in the U.S., he leaves the Davis Quintet.

His last engagement as sideman takes place on the 10th of April in Stuttgart.

The finale of the tour is a series of concerts presented by the impresario Norman Granz under the motto JATP Presents Jazz Winners of 1960: an all-star package with the Davis Quintet, the Stan Getz Quartet and the Oscar Peterson Trio. When the Davis band reaches Dusseldorf, six days after their concert in Stockholm, a scheduled television appearance in a studio of the WDR pending, Miles withdraws his assent and gives Coltrane precedence. Without their band leader Wynton Kelly, Paul Chambers and Jimmy Cobb appear as do, later, Stan Getz and Oscar Peterson.

The program begins with classics from the repertoire of the Davis band: "On Green Dolphin Street," "Walkin'" and ends with, compulsory at Miles concerts, "The Theme". The subsequent ballad medley (a fixture at JATP events) opens with "Yesterdays", "Autumn Leaves" and "What's New", before, in „Moonlight in Vermont“, a second tenor appears with Getz: at that time living in Copenhagen and, in Europe, incomparably better known than Coltrane, shortly before his breakthrough thanks to Bossa Nova fever. If the stylistic differences in the playing of Coltrane and Kelly have their charms, this is particularly true of the concepts of the two saxophonists. In the final "chopping bag" (also known as "Riff tide") Kelly was replaced by Oscar Peterson who could be heard with Getz already in 1953 on the album Diz and Getz.

One of few eye-witnesses with Gerd Dudek was one of the most brilliant and still underrated tenor and soprano saxophonists in Europe. The then 21-year-old had joined Kurt Edelhagen’s orchestra a few weeks earlier and knew the Apollo theatre, converted in 1959 into a TV studio, thanks to several TV productions with the band. Together with his orchestra colleague Dusko Goykovich he had gone to Dusseldorf to experience Miles (they waited a long time in vain, and didn’t know the real reason for his absence) and his other his heroes live: Getz, Dudek’s first major model, who he first tried to imitate in detail, and Coltrane, who would turn out to be, to this day, his most important influence. Although this was not a public concert, only the camera crew, engineers and West German Radio editorial staff were present (the applause was subsequently admixed in order to suggest a concert atmosphere) it was an unforgettable experience. The personal encounters of Dudek with his heroes were quite different: while Getz relaxed cross-legged and was open to discussion Coltrane stood lonely in the cafeteria of the Apollo theatre, in silence.