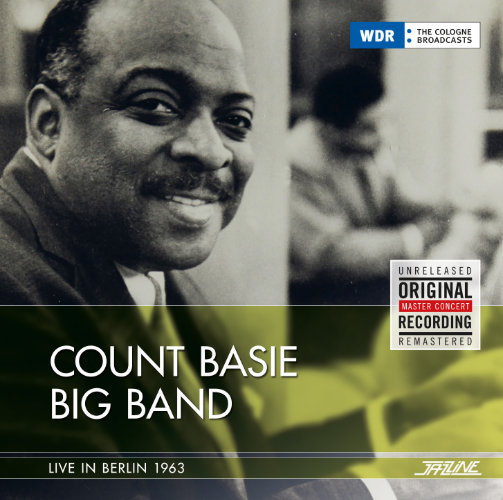 The last event in the history of the Berlin Sportpalast was a jazz concert. Benny Goodman was sounding the conclusive finale. Also in 1958, when "Beatniks dismantled the Sportpalast" (opinion of the press at that time), jazz could be heard on stage: The Kurt Edelhagen orchestra was the opening act of Bill Haley's rock'n'roll-show. Five years later there was another big band on stage, the Count Basie orchestra. One person from the audience even found his way into literature: In his novel Der Weg nach Oobliadooh GDR-born author Fritz Rudolf Fries tells the story of two jazz enthusiasts who – previous to the construction of the Berlin Wall – set out from the Soviet zone for a Basie-concert at the Sportpalast.

Over the years, the multipurpose hall hosted many jazz celebrities on its stage. Among others, Lionel Hampton, Stan Kenton, Duke Ellington, Buddy DeFranco, Louis Armstrong, Ray Charles and Norman Granz's Jazz at the Philharmonic-spectacle. Official recordings exist of Johnny Hodges (Johnny Hodges at Sportpalast, 1961) and the Dutch Swing College Band (The Dutch Swing College Band at the 'Sport Palast' Berlin, 1962, and 20 Years DCB, Live at the Sportpalast, Berlin, 1965).

The problems faced by most big-bands at the end of the 1940s also had an effect on Basie. The bandleader was forced to break up his orchestra and shrink his formation to the size of a combo. However, already in the early-50s he was back in the old format. In the early-60s, his big band was once again one of the world's most favourite big bands. In 1963 it won the Grammy for "Best Performance by an Orchestra for Dancing" for the album This Time by Basie! Hits of the 50's & 60's, arranged by Quincy Jones and recorded in January of the same year. The song also made it into the US-charts (on the eve of the "British Invasion", a massive media exposure of British beat music, which started the following year). This success prompted the record label to release a follow up album in next to no time, More Hits of the 50's & 60's, later renamed Frankly Basie. Count Basie Plays the Hits of Frank Sinatra.

At that moment the band was on its first tour of Japan, a remarkable success. A short time after their return to the USA, the next long business trip was coming up: Europe. In Germany the band paid visits to the main stages in the big cities as well as flying visits to US military bases in provincial towns, as it was quite usual in those days. From one of these rural stopovers a journalist of Jazz Podium reported in the October edition of the magazine, under the remarkable headline "Beer Tent on the Roadside":

"I am asking you, dear jazz connoisseur, how would you feel on discovering Jimmy Rushing and the entire Basie band in a blue-and-white striped beer tent in the middle of the countryside among a colourful, jeering and beer mug clutching crowd, certainly eager for entertainment, but less so for jazz..? The audience in the tent accepts Basie just as they accept the beer in their mugs. No astonishment, no excitement, not even special attention. The people dance, drink and have fun." The colourful report is garnished with a photo of heavyweight Rushing in the beer tent – caption: "Knackwurst-Blues" …

A completely different ambience prevailed at the Berlin Sportpalast concert (one must be grateful that the word creation "Curywurst-Blues" was never brought to the attention of the media). Rushing himself showed off with his body mass and recorded – in the same year of 1963 – the album Five Feet of Soul, a reference to his nickname "Mr. Five by Five". The song of the same name, "He's five feet tall and he's five feet wide" had already become his theme song in the 1940s and just had to be included in Berlin schedule as well.

The attendance of the blues-shouter was a temporary return to the band. Rushing had already been a singer in Basie's group from 1935 to 1948. Joe Williams became his successor in 1954 but had left the orchestra in 1961 to work on his solo career. However, he was to return – just as Rushing – time and again over the following decades.

Williams joined Basie in the early days of a newly established orchestra in 1952, unofficially known as The New Testament Band – to differentiate it from the Old Testament Band of the 30s and 40s. The previous formation focused on the individual performance and thus the soloistic moment, whereas now the ensemble and thereby the arrangement gained importance. The level of precision achieved coined a somewhat paradoxical term: From now on the band was known as swing machine. Of vital significance for this development was Neil Hefti, probably the most important arranger of the New Testament Band, and he was well aware of his importance: "I genuinely believe that my fifty arrangements for Basie have saved him from ruin and are responsible for the two million dollar he takes in annually. It was quite simply a question of life or death for the band, as obviously the pre-war sound did no longer work. A musical cardiac transplantation and it did succeed." (cit. Nolden 1990, p. 60)

Also the Berlin audience could convince itself that it did work. The performance followed a well-planned script. It started moderately with Ellington's "In A Mellotone", "Moon River" (the only song from the Grammy-winning Hits of the 50's & 60's) and "Misty". The band slowly gained pace with "Count `Em" (from Li'l Ol' Groovemaker … Basie! – also recorded in 1963) arranged by Quincy Jones. It reached a first climax with Jimmy Rushing's intermezzo – a glimmer of old Kansas City style in a new form. "The Swingin' Shepherd Blues" offered a prime example of Basie's economy on the piano, this thrifty "pling-pling" (or "bink-bink!" as Henry Miller described it in his Greek travel diary). To what extent his art of "less is more" was primarily the art of perfect timings, the band compellingly showed in Hefti's "Lil' Darlin'" – a charming piece of music, which becomes irrelevant when performed in the wrong tempo and without this crucial timing. What then followed was a finale furioso with "One O'Clock Jump" and "Jumpin' at the Woodside". On this occasion the Count Basie Orchestra showed that it was much more than just a swing machine: It sweats, boils and steams …