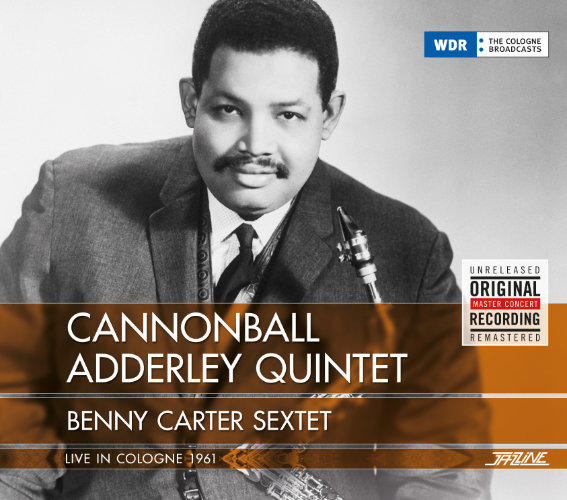 In September 1959 Julian Adderley left Miles Davis' band and established a quintet together with his brother Net, which turned out to be way more successful than his first one. In November 1960 they set off for their first European tour. The band travelled the Netherlands, Germany, Sweden, England and France – as part of Norman Granz’s JATP (Jazz at the Philharmonic) with Coleman Hawkins, Benny Carter, Don Byas, Dizzy Gillespie, Stan Getz, Lalo Schifrin and J.J. Johnson. The Adderley quintet was assigned the task of opening the shows. However, their contract only assigned them 20 to 30 minutes every evening, which again and again led to criticism during the course of the tour.

Five months later "Cannonball’s" group (Nat Adderley, cornett; Victor Feldman, vibraphone and piano; Sam Jones, bass and cello; Louis Hayes, percussion, and as a guest the then still relatively unknown Ron Carter, who assumed the bass-part during Jones' cello-interludes) was back in Europe and on April 15 on stage in Paris. This time the musicians were allowed to perform longer (well documented among others on the CD "En Concert avec Europe1"). One day after their performance at the Olympia they were on stage at the Gürzenich in Cologne (and played tracks not included in the French audio-recording). The Rhinelanders cheered the Adderleys – contrary to Dieter Zimmerle, the then editor of Jazz Podium magazine, whose cover in April featured the two brothers. Criticism was not aroused by the brevity of their performance - as it had been the year before - but virtually by everything they did that evening. The header of Zimmerle’s article referred indirectly to the alto-saxophonist's nickname (a friend from Florida once called him "cannibal" because of his insatiable appetite, which later turned into "Cannonball", a reference to his quickly expanding waistline) writing "Slender Adderley – substantial Peterson":

"The high expectations jazz enthusiasts had ahead of this first in-person encounter, fuelled by the Adderley quintet's splendid reputation based on their impressive recordings, were not fulfilled. The musicians did not seem ready to let their hair down contrary to what would have been necessary to perform the music which had made them famous. It also does not seem to have been a singular case that the Adderley quintet chose a programme, which might have been appropriate for an insignificant engagement at a nightclub, but which was not adequate for a representative jazz concert. It did not come as a surprise that Nat Adderley is a good trumpeter, but he is not better than several of his American and European colleagues. However, it was a bit of a surprise and greatly disappointing, that his famous brother did stand out more for his dry sense of humour than for his accomplishments as a soloist." As if that would not have been enough: Zimmerle attested a "lengthy solo" to Hayes and called the "cello-intermezzo a sheer blunder, which only excited in a negative way". Furthermore, he called the decision to feature the "able vibraphonist" Feldman also as a pianist just at a joint concert with the Oscar Peterson trio as "at any rate unwise". Conclusion: "Compared to Peterson, Adderley was beyond help".

Admittedly, to be on stage together with the enormously popular and virtuous Canadian would probably have been difficult for every pianist. In addition, six out of the ten concerts in Germany were concluded by the Peterson trio. Only at three of the concerts – the kick-off in Cologne, Munich and Karlsruhe – the Adderley-brothers' band was alone on stage (at the concluding concert in Essen they were joined by Mahalia Jackson). However, the WDR-recording does not support Zimmerle’s judgement (who had seen both formations in Stuttgart). It is certainly undisputed that Cannonball was the quartet’s outstanding soloist and that the sidemen were no match for him in that respect.

Only a few days after the concert in Cologne Victor Feldman left the band. His wife was expecting a baby and he wanted to withdraw from road show-life for the following months. In June a successor was ready, yet another American-by-choice from Europe: Joe Zawinul. Half a year later Yusef Lateef, a tenor-saxophonist, flute player and oboist joined them and the quintet grew into a sextet. The first gig of the new band on European soil did not take place in Paris or London, but in a village in the Ardennes, Comblain-La-Tour (which was home to one of the largest European open-air jazz festivals in the years between 1959 and 1966). Never before had the musicians performed in front of such a large audience - 42.000 people - and the concertgoers were also exceptionally joyful, despite the continuous rain. For "Cannonball’s" brother Nat, who shared his love for culinary delights, this trip to Belgium was memorable for other reasons as well. It was here, that he ate his first steak with Sauce Béarnaise (a story he kept telling right to the end of his life)…

Approximately half a year after Adderley’s trip to Cologne another style-forming alto-saxophonist from the USA (not of hard bob/soul jazz, but swing) travelled to the cathedral city, Benny Carter. Not for the live recording of a concert but for studio recordings. At studio 1 of the West German Broadcasting Corporation (WDR) he met with members of Kurt Edelhagen’s orchestra (who had been working for the broadcaster since 1957 and had built up a big band, which did not have to play light music but could focus chiefly on jazz): Saxophonist Karl Drewo, trombonist Raymond Droz, pianist Francis Coppieters, bassist Erich Peter and percussionist Stuff Combe. Two weeks earlier Carter had recorded an album in New York, which should become his most famous one: Further Definitions, a reunion with the tenor-saxophonist Coleman Hawkins (referring to their legendary Paris recording from 1937). Already a year earlier the two had been reunited – as part of the JATP-tour, which had brought another alto-saxophonist to the old world for the first time, Julian "Cannonball" Adderley. And the name he always mentioned next to Charlie Parker as the most important source of inspiration in his early days was that of Benny Carter.