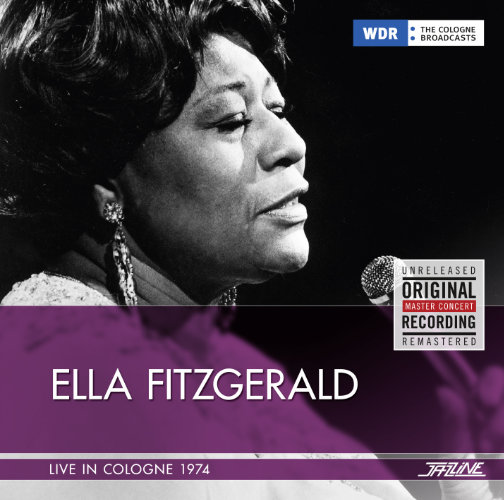 In 1958 the Cologne sports hall opened its gates for the first time. From then on until its demolition four decades later it was the city's most important event location – not only for sports but also for music, ranging from swaying carnival parties to Frank Zappa concerts. Probably the most historic evening was the 13th of November 1976, when Wolf Biermann was on stage for four hours. A performance which caused his expatriation from the German Democratic Republic three days later. However, also celebrities from the world of jazz paid a visit from time to time – such as Ella Fitzgerald on the 1st of February 1974. One week earlier she had started her tour of Germany with concerts in Münster, Dusseldorf, Frankfurt, Karlsruhe, Stuttgart, Ulm, Saarbrücken, Hamburg, Kiel, Hannover, Essen, Ludwigshafen, Munich, Freiburg, Bremen and Berlin.

An unwritten law exists in the world of classical (female) vocal jazz: it is the good old custom to send the gentlemen (if the accompanists are men that is) on stage first, not the lady. On the one hand, this helps to create additional excitement previous to the appearance of the protagonist. On the other hand, it allows the musicians to warm up and to distinguish themselves as soloists. Later on in the concert almost all the attention goes to the singer anyway. In Cologne the musicians of the Tommy Flanagan Quartet appeared first and were subsequently joined by two guests: tenor saxophonist Eddie "Lockjaw" Davis and trumpeter Roy Eldridge.

The previous year Norman Granz, impresario, producer and manager of Fitzgerald, had established Pablo Records. Amongst the most important artists represented on the label were – alongside Oscar Peterson – Ella and Joe Pass. At the end of 1973 Virtuoso, a solo-LP by the guitarist was released, as was Take Love Easy, a duo-album with Fitzgerald and Pass, which had been recorded on same day. This is why Granz had a veritable interest to prominently feature not only Ella's log-term pianist Tommy Flanagan on her tour (who soon afterwards also worked with Pablo) but also Pass. Roy Eldridge and Eddie "Lockjaw" Davis were also among the Pablo-artists and were particularly featured during All-Star Jam Sessions, which were much favoured by Granz. Three weeks previously to the Cologne concert Ella had recorded the album Fine and Mellow together with Davis, Pass and Flanagan.

Therefore, the audience at the sports hall did experience more than just a simple warm-up. It was rather a reduced version of Jazz at the Philharmonic with several soloists. All in all, the prelude to the concert took thirty-five minutes, way longer than usual at similar events. The audience cheered this instrumental prelude, not so the local newspaper Kölnische Rundschau: "The first part of the concert made one fear the worst as only the accompanying musicians performed. They all appeared slightly sleepy and tired at times. Then 'the great' Ella swept on stage, robed in a long pink dress and a feather boa, and sang for a full hour without a single break."

From the moment the lady walked onto the stage, she attracted all the attention and even made the audience forget about the somewhat ambiguous charms of the multipurpose hall – this was not only due to Ella's lovely appearance: "The inhospitable sports hall was sold out completely … Are concerts by the 'grand masters' back in demand? The greying temples of many 'fans' on this evening provided the evidence."

The reviewer's question was not only a rhetorical one. Back in the early and mid-60s concert goers regularly idolised Ella (Flanagan: "This was her heyday"). However, in the meantime public sentiment had changed, not only in respect to music. The singer was aware of that: in 1969 Sarah Vaughan was booed by an '68-generation audience at the Berlin Jazztage – because of her standard repertoire and her ball gown (sic!), which reminded the public too much of an opera singer. In 1973 Duke Ellington was also booed at the same venue. However, Cologne was – and still is – not Berlin and the mentality of the Rhinelanders has always been different.

Ella commented on the changing times with the song "Different Kinds of Music", which was immediately followed by – not without a subtext – "It Don't Mean a Thing (If It Ain't Got That Swing)". She was completely at home in these songs. Less so in others, such as "Good Morning Heartache", which maybe she did not perform melancholically enough: Ella was no Billie and her (musical) cheerful nature made a happy blues out of every blues. In "Lemon Drop" she scatted as if there was no tomorrow. "Gee, Baby, Ain't I Good To You" and "These Foolish Things" were chamber music interludes with references to the just released duo-album by Fitzgerald and Pass. When performed by Ella, the beach girl from Rio underwent a sex change and became the "Boy from Ipanema". Just before Eldridge and Davis joined her to whine "Now's The Time" together, she enthralled the audience with the Brecht/Weill-classic "Mack the Knife", without forgetting the text – as she had done on the legendary Ella in Berlin recording.

At the end, the Kölnische Rundschau attested a euphoric festive mood: "The fans were delirious from the questions and answers game the musical volcano Ella Fitzgerald played with the instrumentalists. Cheers and frenetic applause followed – the audience flocked around the stage to be as close as possible for the encore."

Just before the last encore Ella asked her audience which song they wanted her to conclude the concert with. There were plenty of suggestions from the auditorium. The song then performed (but not included in this recording) had a strong link with Germany, which was much appreciated by the Rhinelanders – "Lorelei". A song about a creature bewitching boatmen on the river Rhine:

"She created quite a stir/And I want to be like her/I want to be like that gal on the river/Who sang her song to the ships passing by/She had the goods and how she could deliver/The Lorelei."

Let us just ignore the tragic ending of the legend, the inevitable death of the boatmen. This being said, the ecstasy of the spellbound Cologne audience leads us to the assumption that Ella was indeed – the Lorelei.