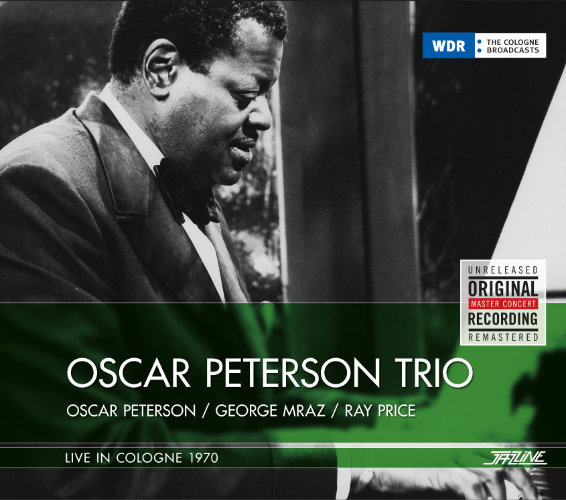 One knew where one stood with him. A stylistically reliable factor, from whom any jazz innovation seemed to bounce off like flotsam from a rock. With his physique alone Oscar Peterson radiated dominance, let alone with his performance. A Sun King on the piano, the absolute master of the trio, who – his co-musicians positioned behind his back – hardly needed any eye contact to convey his nonverbal stage directions.

The short-lived trio together with George Mraz and Ray Price confirmed this impression even more than previous formations. Although comparisons are out of the question or are at least to be handled with care, they do impose themselves, especially when talking about somebody, who since the 1950s always preferred the trio – and this is the bottom line – changed nothing in his philosophy of performing.

One can be sure, that the colleagues of perfectionist Peterson were technically beyond any doubt and way more than just solid and precise. Yet, the level of interaction and playfulness, which the trios with Ray Brown / Ed Thigpen and Sam Jones / Bobby Durham displayed, was never reached by the 1970-lineup. The time spent together was just too short to reach such a level of intimacy. It was also too short for the rhythm section to be confident enough to do something Peterson rated highly: to challenge the maestro.
Against this – in the true sense of the word – "background" of a comparatively restrained bass-percussion team, the virtuosity of the pianist appeared to be even more remarkable. The live-recording leaves no doubt that he was at the height of his technical skills. However, despite contrary presumptions – he was never interested in mere extras as accompanists.

In his readable autobiography A Jazz Odyssey Peterson admits to be no big fan of the bowed bass solo. The Canadian is probably not the only one: There are just too many examples, where not only the sound is meagre, but where over achieving bassists lose their perfect intonation when reaching for the bow. There is a reason why the recording of the Peterson trio from the Gürzenich in Cologne features even two con arco-solos: George Mraz, educated in classical music, is one of the few, well, one of the very few jazz instrumentalists, who knows his stuff.

It had very little – or even nothing - to do with his character, that Czech-born Jiri Mraz, who called himself George Mraz after being granted US-citizenship, frequently complained about the level of difficulty of the bass-parts: Especially during the perfectly arranged themes, the bassist was hardly ever allowed to indulge in a relaxed walking bass performance. Peterson’s predilection for breakneck speed at times complicated the matter even further. Moreover, Mraz, who had studied at the Berklee School of Music from 1968 to 1970, had been engaged by the pianist virtually from the spot to join the tour and was – as the saying goes – "plunged in at the deep end". Mraz passed this test with flying colours.

During his time at the German label MPS there had been several personnel changes. Ray Brown was replaced by Sam Jones, Ed Thigpen by Louis Hayes and finally by Bobby Durham. The trio including Mraz and Price, who was only briefly associated with the band, recorded two albums, Another Day and Walking The Line, both came into existence between November 10 and 13 of 1970 in Villingen.

Ray Price (not to be confused with the American country singer, nor the rugby-star of the same name) was a British percussionist living in Los Angeles, who has worked with George Shearing and Stan Kenton, among others. During the Gürzenich-concert, the old-style timekeeper only dropped his British coolness during "Cute", a classical drum-feature.

Four days previous to the performance in Cologne the trio had been on stage in Stuttgart. Two bands were presented to the audience under the slogan "Treffpunkt Jazz": at first a group formed around Elvin Jones (with the tenor saxophonists George Coleman and Frank Foster and the bassist Wilbur Little), followed by the Peterson trio. The different styles of the two percussionists were not only audible but also visible: Jones made use of Price’s drum-set and worked it so hard, that it slowly but certainly started to move across the stage. This would have never happened to the Peterson-drummer …

The eye- and ear witnesses of the evening were definitely divided in their judgement. One observer from the magazine Jazz Podium noted down: "The opportunity to spark the Peterson-only-fans for something else had definitely passed by. Some of them left the concert quite agitated or even departed early during the break, expressing their anger as they had paid for a full-length Peterson-only concert. Unfortunately, at first the Oscar Peterson trio had been advertised alone and also the tickets only mentioned them."

However, in Cologne the big three performed alone – and the Peterson-faithful were among themselves. Just as it had been at the Gürzenich-concerts in 1961 (Jazzline N 77 004) and in 1963 (Jazzline N 77 018). Although in the beginning the enthusiasm was comparatively moderate by Rhineland standards – at the end the audience was cheering.