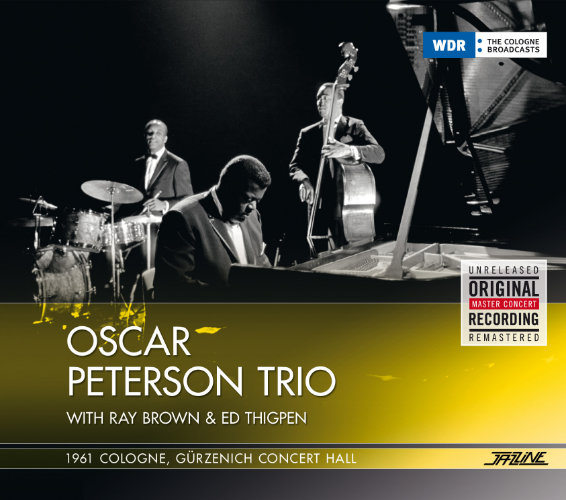 In the 1950s Oscar Peterson managed to form the best paid jazz trio without percussion instruments. The resignation of his guitarist and the growing demand for concerts in large halls made him and his future manager Norman Granz think about a new instrumentation: Instead of a chamber musical orchestration with piano, basso and guitar they opted for the classical piano trio - and therefore in favour of acoustically way more prominent drums. In 1958 Gene Gammage assumed this position. However, a year later the formation was altered and the pianist's best group ever was established, as many believe. Peterson, Ray Brown and the new third-man Ed Thigpen did not only appear on stage as a trio: together they established the Advanced School of Contemporary Music in Tokyo in 1960. They only worked with rhythm sections and the setting was exceptionally exclusive: the students of Peterson also had to perform with Brown and Thigpen, whereas Brown's pupils could not avoid Peterson's and Thigpen's scrutiny. In 1964 the school had to close down for financial reasons and a year later the trio broke up. The pianist later described this period in the band's history as: "Six years of incredible music".

"Every night there was a threatening contest. I came downstairs or coming into the club and they would say, ‘How do you feel?' I said, ‘I feel good.' They said, ‘I hope so.' Why? They said, 'because we're going to waste you tonight!' That was the attitude! "

This attitude primarily characterised the trio formed with Ray Brown and Ed Thigpen (to a lesser extant also the later trio with Jones and Durham).

To hold one's ground in the presence of Peterson was a great challenge: There was never any doubt about Peterson's dominant role in what might be called a trio formed by a virtuoso. He expected the best and sometimes complicated life for the rhythm section even further by not revealing the key of a piece. Brown and Thigpen, both ambitious musicians, developed their own secret way of communicating with each other and tried to challenge the master on their part. This was exactly what Peterson wanted. The bassist remembers:

"First thing that happens, you put a group together and you want this group to play good and you rehearse and practise, you know. And after it becomes a good group, then you have the elasticity to say, ‘hey, I challenge you tonight!' And Oscar Peterson just happens to be that particular type of guy, he likes a challenge. We would get on the stage at night and before we play the first number we look at him and say, ‘we gonna stomp you into the ground!' And he would say, ‘oh yeah?!?' Then he would really play the piano!"

Peterson was a heavy-weight on the piano as well as in real life; a steady force in the ever-changing world of jazz of those years. There were no surprises; one knew what one could expect. The Canadian produced one album after the other - quite unlike many of his colleagues. This made the known workaholic Peterson more and more a target for the accusation of being too fond of clichés. However, the exceptional workload was the basis for a group identity which never reappeared with changing casts during the years to come, when the trio "basically only produced piano music of the highest quality, with rhythm section" (Joachim-Ernst Berendt).

As a virtuoso with a dexterity that was only matched by Art Tatum on a good day, he impersonated the artist, whom the critiques classified as an exceptional pianist with the tendency to follow stereotypes and who made it easy for his fans to cherish him as a god of the piano. Despite all his le-roi-c'est-moi-attitudes, when it came to music Peterson never appeared aloof: an earnest and serious master who enjoyed his work. Serious fun.

In the years before Peterson had already visited Cologne together with Norman Granze's JATP (Jazz at the Philharmonic) as well as with Herb Ellis and Brown. This time he was there with the congenial team of Brown and Thigpen (Kurt Edelhagen's orchestra was the second band to perform that night). The concert was part of the Konzert für die Jugend-series (Concerts for young adults) initiated by the WDR and presented by Dietrich Schulz-Köhn. It made sense to present this particular pianist to the adolescents: not only for their generation Peterson was the catalyst for a lasting enthusiasm for jazz, a real "starter drug" for future jazz aficionados. The concert was held at the Gürzenich, a location with a long history of good spirit, where in a time long gone emperors and kings held their receptions and lavish celebrations. Later it became the location for carnival shows and organised cheerfulness. In the Cologne of the 50s and 60s Dukes and Counts of jazz were acclaimed here – and also the uncrowned sovereign of the keyboard.