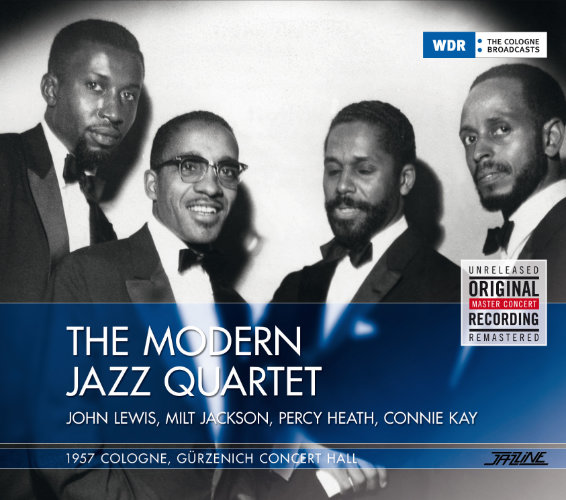 Especially in the early years of the modern jazz quartet Europe offered a grateful public. It was here that the band celebrated its first successes while in the USA it was still greeted with a certain reservation. On the occasion of the 1000th edition of Joachim-Ernst Berendt's concert series Jazztime Baden-Baden they performed alongside Kurt Edelhagen and Miles Davis in 1956. A Birdland All Stars – Tour brought the MJQ to other German cities as well – sharing a stage with Davis, Lester Young and Bud Powell. Performing right after the tarnished bebop-pianist maximised the audience's enthusiasm for the cultivated quartet. Dietmar Zimmerle, founder and at that time also publisher of the Jazz-Podium magazine wrote: "If anyone was in a position to cheer-up the noticeably depressed public after Powell's performance, then it was this group of four musicians, who  performed a concert of the best sort."

If the phrase "performing a concert" was somewhat associated with respectable behaviour, then the MJQ fully came up to that expectation.

In the run-up to the European tour in 1957 in whose course the band only performed solo-gigs, the band's leader approached the organisers with a request:

"On a special request by John Lewis, the concerts mostly take place at smaller concert halls, ideal for chamber music. This should not only provide the music of the MJQ with a fitting setting but also attract a concert-hall audience which  could not be reached at the band's usual concert locations."

Among the concert locations which were considered "appropriate" was the Mozarteum Salzburg. In Germany the tour brought the quartet to Frankfurt, Hanover, Bremen, Hamburg, Donaueschingen (MPS: The Historic Donaueschingen Jazz Concert 1957), Berlin, Duisburg, Rheda, Essen, Dortmund, Cologne and Stuttgart during October and November. On the occasion of the Stuttgart Woche der Leichten Musik Harald Banter's Media-Band and the MJQ performed Gunther Schuller's dodecaphonic "Twelve by Eleven".

The tour was organised by the Department for Concerts at the German Jazz Federation (DFJ), whose president Olaf Hudtwalcker once more raised the topic of the location in the programme: "The question of where a band performs does not change the artistic quality but it makes a difference in the quality of the presentation". Whereas in 1956 the MJQ appeared on stage at the Cologne exhibition halls, now the prestigious Gürzenich was the chosen location. One and a half years earlier another jazz band had already performed there – the ensemble of Harald Bantner, who later worked with the MJQ in Stuttgart: "Back then the music I made was distinguished and reserved chamber music. In Wuppertal or at other places suddenly beer mats would be thrown on stage…However, in Cologne I thought: that's like being in a symphony concert. People were wearing ties and festive clothes, the disciplined hall was crammed".

At least in Cologne jazz had finally reached the middle-class. Spätausgabe, a Dusseldorf tabloid condensed the message of the Banter-concert in one line: Jazz fit for good society.

For their Gürzenich-debute on the 6th of November the gentlemen of the MJQ appeared – as usually – dressed in a tuxedo and bow-tie. The concert hall – completely destroyed during World War II and only back in use since 1955 – was only a shadow of its own pompous past. Anyhow, it was a pleasing contrast to the exhibition halls' dubious charm. The Gürzenich (completed in 1447) was not only an old building but also rich in history: In 1849 Karl Marx presented his Manifest der Kommunistischen Partei to the world and during the centuries before him emperors and kings held their splendid receptions there.

It is pure speculation if the location's history had anything to do with the pianist's choice for the first piece - "The Queen's Fancy". Anyhow, it was a perfect set-off. With Lewis' weakness for baroque fugues the band made clear right at the beginning what their aesthetical keystone was: a cool combination of jazz with compositional elements from European classical music. Also "Fontessa" combines new and old world in that sense. Two tracks were still reminiscent of the musicians' bebop past – although the cool interpretations hardly remind one of the hot tempered originals: Dizzy Gillespie's compositions "A Night In Tunisia" and "Woody'n You" are an homage to Lewis', Jackson's and Heath's former employer, from whose big band the core of the MJQ emerged after the break-up of the former in 1952. "Bluesology" was a show-piece for arguably the most blues-affine vibraharpist in the world of jazz (right before the start of the tour Jackson had recorded an album with blues tendencies Soul Brothers with Ray Charles). "Three Windows", "One Never Knows", "Venice" and "The Golden Striker" are four tracks taken from the sound track of the French movie Sait-on Jamais (No Sun in Venice) recorded the summer before. Given the oncoming winter Lewis & Co decided to add an old English Christmas carol to their programme, "God Rest Ye Merry, Gentlemen". The audience rewarded them with more than just the usual level of applause. Thus, the gentlemen returned to the Gürzenich already in 1959.