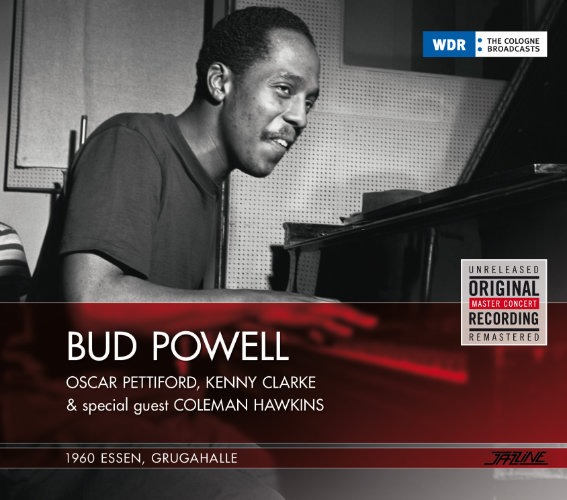 In the 50s and 60s, more and more Americans are driven to Europe by racism and the contempt of improvised music in the "motherland of jazz”. The more pleasant cultural climate and better terms of employment are only one side of European exile. The other: a gradual loss of importance; slowly but surely the American scene forgets the protagonists who have run away. The newcomers pay a high price for their acceptance as artists: For years, operating far from the epicenter of jazz music: New York, the international public loses track of them.

When Bud Powell, Oscar Pettiford and Kenny Clarke appear at the Essen Jazz Festival in 1960, the announcer, Joachim Ernst Berendt, underlines their historical significance, knowing full well that, since moving to Paris, they no longer are in the spotlight.

„Ladies and gentlemen; dear jazz friends! There are many great jazz musicians, but there are only a few who have made such significant contributions to jazz history that their contribution remains felt today... I am now in the fortunate position to announce a trio, each one of whom has influenced jazz history- the Oscar Pettiford trio!“

The fact that Berendt announced a piano trio under the name of the bassist, at a time when the hierarchical primacy of a pianist was still undisputed, is surprising. He might have had his reasons. Powell's mental and physical state was anything but stable; engaging him was not without risk. On the other hand Pettiford had lived in Germany for some time, in Baden-Baden, where the jazz editor of SWF worked.

A personal friendship between the two may have led Berendt to transfer the nominal management to the bassist. The fact that one of his compositions appeared in the repertoire is likely to have less to do with it: As early as 1956 Powell had recorded "Blues in the Closet“(with Ray Brown and Osie Johnson) under his own name. Berendt announces the title with a hint of shame:

"The Oscar Pettiford Trio will first play a Theme by Dizzy Gillespie, ‚Shaw Nuff’, and then Oscar Pettiford’s best known composition: a blues with a title which can occur, actually, only to Oscar Pettiford – one does not announce it with pleasure, but the piece is so named: "Blues in the Closet."
Pettiford seems to have anticipated sneers and the piece was often recorded under the more harmless title “Collard Greens And Black-Eyed Peas“- named after a culinary Southern specialty... The reviewer of Jazz Podium Karl-Heinz Nass feels compelled to point out that the closet of the original title “contrary to other opinions”, means ‚seclusion’.

When, in the second set, Coleman Hawkins appears, Berendt announces him as an „old man“– referring to the external appearance of the tenor:

"All the old jazz was almost wholly without saxophone. Coleman Hawskins was the first to introduce the saxophone into jazz; he is the father of the tenor saxophone. The amazing thing is that this old man has developed, at the age of 56, a vitality which blows many of his younger students away. I have the privilege to present: Coleman Hawkins!"

His appearance in Essen with three Bop icons was anything but an aesthetic mistake: The saxophonist was a mediator between tradition and modernity, and had sought, from 1940, the company of the young avant-garde. Powell, Clarke and Pettiford, with whom he led a trio in 1945, were familiar to him. The final composition "Stuffy" is exemplary for the mix of style, Semi-Bebop, which Coleman Hawkins started to cultivate at that time.

Pettiford settled, after a Jazz At The Philharmonic tour, in Europe in 1958, worked first in Baden-Baden with Hans Koller and Attila Zoller, then moved to Vienna and Copenhagen, where he died five months after the Essen concert, in September 1960. Kenny Clarke lived in Paris, from 1956; the Kenny Clarke-Francy Boland Big Band, based in Cologne, brought him, in subsequent years, often to Germany and Bud Powell appeared after his move to France for the second time in Essen. The year before one could experience him with Pettiford and Clarke at the side of Rolf Kühns and the rhythm group as an accompanist of Martial Solal. In 1960 they appeared as an independent trio – for the first and last time.