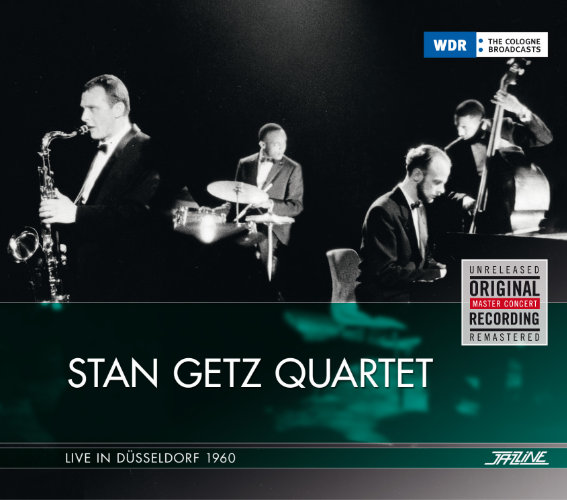 Impresario Norman Granz had moved to Switzerland in 1959. He coordinated his JATP-tours from there, which at that time were only successful in Europe anymore. In the following year he even sent off two all-star casts under the slogan Norman Granz’s Jazz at the Philharmonic Presents Jazz Winners of 1960. The first cast was made up by Ella Fitzgerald, Roy Eldridge, the Jimmy Giuffre Trio and the Shelly Manne Quintet. The second cast brought the Miles Davis Quintet, the Oscar Peterson Trio and the Stan Getz Quartet together.

At that time the saxophonist was also residing in Europe. During a three-month JATP-tour in 1958, on which he was accompanied by his Swedish wife Monica, he had made the decision to settle down in Scandinavia. The following three years he spent mostly in Copenhagen.

A planed performance during the Essener Jazztage did not materialise. JATP 2 stopped over in Vienna, Zurich, Amsterdam, Stuttgart, Berlin, Hamburg, Frankfurt, Munich, Karlsruhe and Nuremberg. There were even two engagements in Dusseldorf: to begin with a recording at the Apollo Theatre, which was used as a television studio by WDR since the previous year. At that occasion an unenthusiastic Miles abandoned his commitment (probably due to the obviously increasing tension during the tour between him and John Coltrane) and let his tenor-saxophonist go first. Granz decided that Coltrane should perform together with the rhythm section of the Davis-Band (Wynton Kelly, Paul Chambers and Jimmy Cobb). Subsequently Getz joined them – the first and last time that both tenors played along (released on the CD John Coltrane. 1960 Düsseldorf/Jazzline N 77 002). Also Peterson briefly appeared to stand in for Kelly during one piece.

Subsequently that evening at the Rheinhalle (today: Tonhalle) Stan Getz was on stage with "his own" quartet. The playbill announced the saxophonist’s Scandinavian band; however, he had immediately prior to the tour decided to dismiss several of its members on short notice. The cast on the tour therefore reflected the USA, Getz’s home country, as well as his adopted home Europe. Ray Brown and Ed Thigpen, two fellow Americans, who formed a somnambulistic swinging duo since 1959 as rhythm selection of Oscar Peters (and therefore had to perform twice at the Rheinhalle) performed alongside Getz. Several years later the percussionist should move to Getz’s onetime exile Copenhagen, albeit forever.

Jan Johansson, who died aged only 37, is hardly known outside Scandinavia. In northern Europe the situation is quite different: Hardly any jazz musician in that region is not referring to him and his artistic influence. The main reason for the this appreciation for and popularity of the pianist is Jazz pa Svenska, a recording which combined jazz with Swedish folk music and sold more than a quarter of a million copies and still is the biggest-selling jazz production in Swedish music history. Hardly any Swedish household without this record can be found (nevertheless, also the rest of the world could enjoy his music – however, without knowing it was by him: Johansson did compose the theme music to the Pipi Longstocking movies). During his time at university the pianist got to know Stan Getz, who at first had emigrated to Sweden before moving to Copenhagen. The consequence was that Johansson discontinued his engineering studies, decided to become a full-time musician and worked with the famous saxophonist from the USA, among others. In 1960 he became the first European to participate in a JATP-tour.

Jan Johansson was also present a few days prior to his appearance in Dusseldorf, when Getz, recorded Cool Velvet arranged by Russ Garcia at the Südwestfunk in Baden-Baden, his first but not last jaunt into the realm of strings; in 1961 – back in the USA – the way more advanced production Focus by the arranger Eddie Sauter followed. Also together with Johansson, Getz recorded two discs, which were entitled At Large and released in 1960.

In May of 1960 Dieter Zimmerle, the editor of the magazine Jazz Podium, published a review entitled Plus and Minus of JATP 2: "Between the positive start (Peterson) and the negative finish (Davis) of this JATP-programme Stan Getz performed on the tenor saxophone. His performance varied from concert to concert as it is quite usual at such tours in general and at this ambivalent JATP-package No. 2 in particular. More than others the sensitive Getz is not detached from outside influences. Partly he uses his technical abilities for minor jibes; partly he attends to expressive lyrical subjects. The Swedish pianist Jan Johansson, whose phrasing often showed a distinct closeness to the play of Getz, and the Peterson-colleagues Ray Brown and Ed Thigpen were able accompanists." In Dusseldorf Getz seemed to be inspired and in good spirits. His solo on "Out of Nowhere"(the origin of the second version is uncertain) is a hit on YouTube already for quite some time.

"I am sick and tired of the competitive pressure in the USA. In Denmark I have more time for my family. And everything is less hectic. I enjoy the relaxed way of life in Europe. My intention was to regain my inner harmony. In the States this is hardly possible." (from: Ekkehard Jost "Jazzgeschichten aus Europa", p. 194)

However, approximately nine months after the concert in Dusseldorf the expatriate made his comeback in the USA. Quick successes seemed to confirm his decision. Shortly afterwards Stan Getz became world renowned not only among jazz enthusiasts, thanks to the Bossa-Nova and Jazz-Samba boom. Nevertheless, he should never regain his inner harmony.