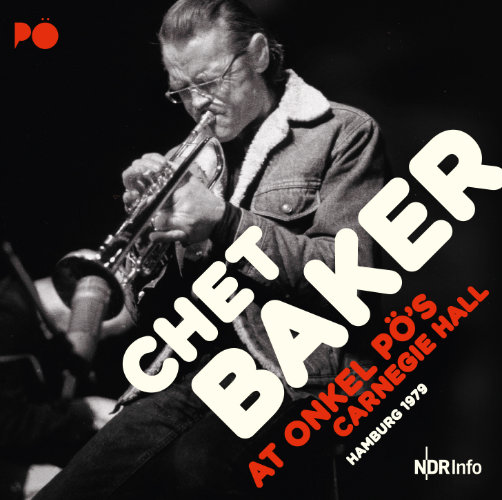 Chet Baker
On that evening I was there myself...but way too young to realise what was going on. However, I did manage to convince the music-editor of my local newspaper’s arts section, who had an open mind when it came to jazz, to commission me to write a piece on Chet Baker. The legends surrounding his life were omnipresent – already since the start of his career together with Charlie Parker and all the more since forming part of the unparalleled quartet led by baritone-saxophonist Gerry Mulligan, the 1929 born Chesney Henry Baker Jr. was constantly troubled by his drug addiction; however, despite phases of painstaking heroin addiction and methadone-treatments (or maybe just because of the circumstances..) an unique oeuvre came into existence. If anyone played the trumpet in a “cool” way (and not ultimately “hot” as the heroes of bebop did) it was Chet Baker; he was performing at the same level of excellence as Miles Davis, the other style-defining musician of the period.

Those were the few facts the youthful concert critic of April 1979 knew about…a few more legends were added: for example, the story goes that Baker sometimes (also once in Hamburg) lost some teeth in fights and had to disappear for a while afterwards, as life and work was extremely challenging for a trumpeter with a new set of teeth. His music depended on the perfect interaction of lips, air and – precisely – teeth. However, by the mid-70s Baker was back on stage, two LPs had been released, featuring recordings of the re-encounter with Mulligan; and those recordings were so exquisite, that they are still much treasured delights in the private archive. Also the newspaper story on the Hamburg concert remained on the pin board for years…

Gabriele Kleinschmidt, Germany’s most bustling concert manager in those years, whose adventurous tour-schedules pushed musicians - and the tour guide herself - to the limit, even managed to organise a meeting with Mr. Baker himself. The encounter took place a few steps from the “Motel Hamburg” at a local Italian restaurant; over a bowl of pasta the English speaking skills of the interviewer turned out to be miserable. However, Chet Baker did not have much to tell anyway – withdrawn from the world he was munching his pasta without enthusiasm; he looked frail, exhausted and much older than 50…the milestone birthday he was just approaching. Everything was different later on at “Onkel Pö” – every sound of the recording makes one forget all reservations, all the scepticism towards the media-phenomenon. Baker’s music is crystal clear, powerful, compact and focused. He does not rely on the instrumental routine. Eloquently he tells the story of the compositions he selected for that evening; just five pieces for 100 minutes – Cole Porter’s standard “Love for sale” as an opener, interpreted in a slightly rocky way, then the empathic fable “You can’t go home again” by Don Sebesky, followed by “There‘ll never be another you” by Harry Warren as a showcase for Baker’s unique, fragile and yet seductive scat, as well as two true highlights: “Black eyes” by Wayne Shorter and “Broken Wing” by Richie Beirach … Chet Baker himself never composed a song – but like no other, he was able to absorb and understand the best music ideas of his contemporaries; he was a master in the art of dealing with masters and truly “congenial”; this often misused word is absolutely warranted here.

Three members of the generation of musicians coming after his own accompanied Baker on the tour: Phil Markovitz from New York on the piano and the Belgian bassist Jean-Louis Rassinfosse were both born in 1952 – the very year of Baker’s triumph with “My funny valentine”. The percussionist Charlie Rice was also one of the youngsters; the bassist Rassinfosse should remain Baker’s companion for a while. In these years Baker was seeking the acquaintance of younger musicians; also the guitarist Doug Raney, Jimmy Rainey’s son, was among his partners. Baker also returned to the recording studio; some classics came into existence, such as “SteepleChase” in Copenhagen, or “Enja” in Munich. Baker still had nine years left.

He was probably never truly “clean” and free of drugs. In 1987 he performed as a guest of the NDR big band at the Hamburg Audimax (in the context of the short-lived fair “Musica”) – during the concert the Swede Lennard Axelsson, Baker’s colleague and long-term lead-trumpeter of the ensemble, had to leave the stage for a while: the emotions were too much for him and he had to shed tears considering the enormous grief and happiness of meeting Baker. The following year Baker’s legacy came into existence: Less than two week before his death, “The Last Concert” was recorded in Hannover, together with the NDR big band and the radio orchestra of Hannover.

Even the story of Baker’s death remains mystified – he is said to have fallen from the window of his room at the hotel “Prins Hendrik” across the street from the main railway station in Amsterdam. Maybe he also tried to climb up the gutter to retrieve his trumpet from the room after having been evicted from the hotel…Nowadays the hotel advertises his old room as “Chet Baker Suite” to paying guests. A commemorative plaque at the entrance reminds one of the genius who was his own worst enemy.

Michael Laages
PS: And yes, “Onkel Pö’s Carnegie Hall” could be a real concert hall! Not just a shed for jazz or blues parties, a true space for the arts… Harriet, the woman behind the bar, took care that no clatter of glasses disturbed the music.