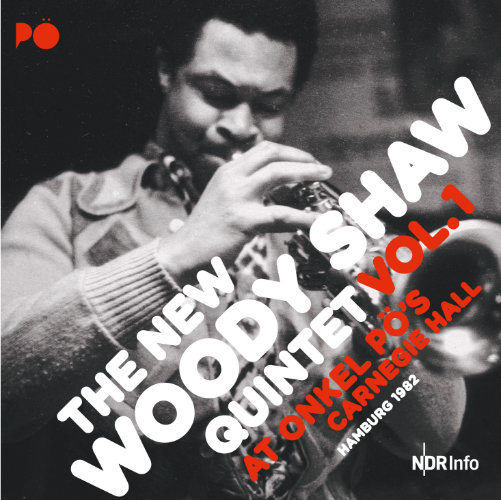 It is a positive sensation and pure joy to be reminded of an extraordinary and very special musician by this current CD release – as Woody Shaw disappeared from the personal jazz-universe of way too many people after his early and tragic death in May 1989. Unjustly of course – Shaw represents a position in the recent history of the jazz trumpet, which hardly ever before nor after was painted so clearly, so precisely and with so much energy: as the quivering and delicate virtuosity of a coeval, who has absorbed virtually all earlier traditions – modernity and awareness for history as the spirit of jazz.

Furthermore, Woody Shaw was at the zenith of his personal development as an artist at the time of the performance at “Onkel Pö’s Carnegie Hall” on 13 January 1982; just imagine what he might have achieved had he lived longer than for just seven more years … He was accompanied by a sensational group of musicians. All of them subsequently made news as artists in their own right: the drummer Tony Reedus as well as the bassist Stafford James, the pianist Mulgrew Miller and especially the young trombonist Steve Turre, who alongside Lester Bowie became the new young voice of the jazz-trombone shortly afterwards and who gave orientation to a whole generation. Band leader Woody might have guessed it, when he (unlike many other band leaders in this CD series “Live aus dem Onkel Pö”)introduced the members of his band right after the opening song: modest, friendly and appealing as always. Woody Shaw was a true master of his trade; People like him are missed in this business, which is usually characterised by hubris, not the spirit of humanity.

Shaw, who was born on Christmas Eve of 1944 in Laurinburg (North Carolina) as the son of a gospel singer - from whom he also inherited his name at birth: Woody Brown - was a storyteller; he allowed himself and his colleagues plenty of time to develop their fantasies life on stage. His own fantasies were characterised by technical perfection (just as those of his role model Freddie Hubbard) and a hands-on approach when it came to sound and tonality; Shaw was extremely fast when he wanted to be, but never lost the clarity of his musical language. At the same time, everything he narrated on stage seemed to be told for the very first time – his colleague Randy Becker described Shaw as “the last in a line of trumpeters, who really added something new to the art of the jazz-trumpet” and furthermore, he “really invented a new language”. Woody Shaw was also a musician’s musician, an artist who was highly esteemed by his colleagues, who were happy to perform together with him.

As an eleven-year old he received his first music lessons; at the age of 20, after gaining his first experiences, Eric Dolphy invited him to Paris shortly before his death. He stayed for one year and was introduced to Bud Powell, Johnny Griffín and Kenny Clarke – a formative period in his live. Back in New York Woody Shaw joined Horace Silver, later he met artists such as McCoy Tyner or Max Roach. Since the early 70s he also produced recordings under his own name. For some time Shaw was also part of the line-up of Art Blakey and Gil Evans. The Berlin “Jazztage” discovered the trumpeter in 1976, before that and also afterwards Shaw performed together with the “Concert Jazz Band” by George Gruntz, the Berlin festival manager. Overall, Europe became more important for him again. His appearance at “Onkel Pö” in Hamburg (Shaw had been there already three years earlier) was part of a sort-of “artist in residence” in the Old World, where - as it is well known - jazz was (and is!) more cherished than in its homeland, the USA. Again and again Paris was a home base for jazz artists and during the mid-80s a “Paris Reunion Band” was formed around Woody Shaw.

Then the drama unfolded … Woody Shaw was ravaged by dire diseases. Slowly but surely he lost his eyesight and in this state he tumbled in front of a subway in New York. He lost one arm. Several weeks later his kidneys stop working. Woody Shaw died on 10 May 1989. He did not live to celebrate his 45th birthday.

His music – as documented here in this recording of a very intensive concert, as they could be experienced at “Onkel Pö”, besides the passion-driven, delirious performances by entertainers such as Dizzy Gillespie or blues-fireworks by the likes of Albert Collins - is a huge and important heritage of contemporary jazz. This heritage is now enriched by another sparkling facet. Those who listen, will learn to inherit.
Michael Laages