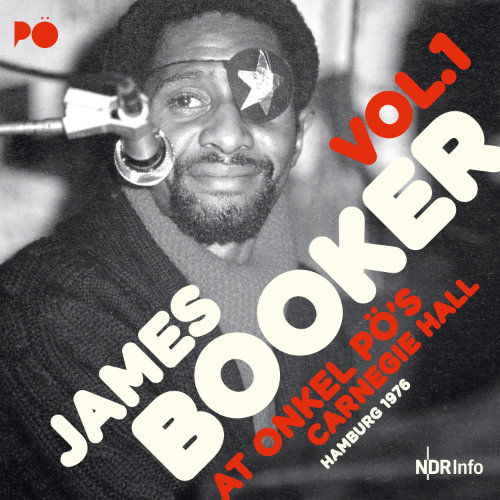 The good ‘bad’ Spirit of Blues

We can only guess, if the local yellow press sent a journalist to “Onkel Pö’s Carnegie Hall” on October 27, 1976 – the concert which took place on that very day is documented on this CD – to report, if the man from New Orleans would misbehave yet again. James Carroll Booker III, aged 35 at the time of his visit to Hamburg, had to defend a particularly bad reputation (at least when seen from a petty bourgeois point of view). Since his early childhood and as a consequence of an accident with an ambulance vehicle, he was in constant close contact with certain painkilling and mood-boosting drugs: James C. Booker was a textbook example of a junkie. He also had severe drinking problems and had to wear a pirate-style eyepatch after an accident involving a needle. Such a person on stage surely called for a police presence on the premises of “Onkel Pö”!

James C. Booker was certainly one of those musicians respectable parents always wanted their already slightly less-respectable offspring to stay away from. However, whoever came to the corner house on Lehm- and Eppendorfer Weg that evening in October especially to experience the tragic side of this legendary figure, who lived in almost constant danger of falling off his piano stool or even the stage(yes, this did happen on other occasions!), must have been utterly disappointed – nothing, not a single éclat happened - at least in the first part of this “Pö”-concert; instead, it was a sort of ‘high mass’ of blues.

James C. Booker’s performance was exceptionally marvellous and just what blues should be all about. All the talk about his problems and the creation of legends which immediately started after his early death in 1983 (in the waiting room of a rehabilitation clinic!), seemed so unimportant and irrelevant that day, just as irrelevant as the timetable of the Hamburg metro; because it does not matter if the last train has already departed (as on that particular evening) with an artist performing many of his own creations but also several blues-classics with so much devotion while being deeply rooted in the spiritual soil of this special city located between Mississippi and Lake Pontchartrain.

It cannot all have been just sweet-talk, what colleagues like Mac Rebennack aka Dr. John, Fats Domino’s long-time partner Dave Bartholomew or one of the Neville-brothers had to say about the short but intensive career of James C. Booker. They all have supported Booker in their way as good as possible; and they also tried to protect him from himself. Obviously, the blues-universe supplied this man, who was constantly at risk to succumb to his bad demons, with so much live-giving energy and support, that in his energetic hours he could become a genius of his era and the musical history he represented. Legend has it, that this highly unpredictable man sometimes also delivered lousy performances – the evening at “Onkel Pö” was certainly none of those.

He knew the classics well: Percy Mayfield, Fats Domino and Dave Bartholomew, Jimmy Witherspoon and Allen Toussaint, Doc Pomus and T-Bone Walker. In addition, he threw in a few of his own compositions, like “Junco Partner“, the title-song of a then just released recording, which also Dr. John talks about … Whatever he took on that evening he charged with a rolling bassline and virtuous flickering of his right hand: more than four decades later we can still witness a playful genius, whose maltreated soul deep down is craving for ease, passion and happiness.

“Send me someone to love“– who cares if it is a handsome young man or not. Nothing is out of the ordinary that evening at “Onkel Pö”, which James C. Booker seemed to have enjoyed as well; there will be a follow-up to this CD (incl. the finale of the concert). The police could return home, the gossip reporter had nothing to gossip about. Those of us who love blues and consider it to be the source of so many later developments in the world of music, including the first steps in the direction of soul and rock, will be astonished and delighted by the crystal-like clarity of this concert. Just wait for James C. Booker, the man with the eye-patch from New Orleans, to intone “My bonnie“ without any hint of sentimental “bring back my bonnie to me” -three-fourth conventions. You will stop your CD-player to listen to the piece right from the start once more.

How does he do it? It is so simple. But who would have such an idea – except for James C. Booker?