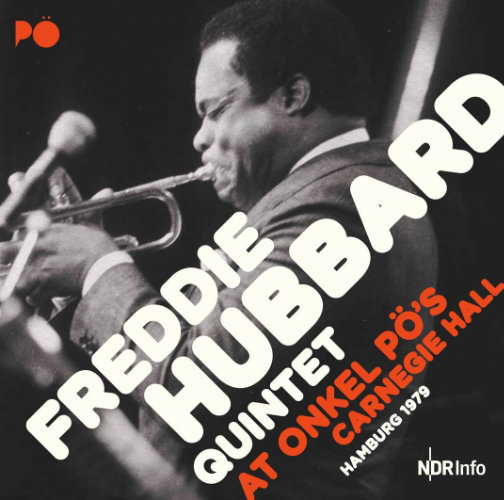 When Freddie Hubbard came to Hamburg to get on the tiny stage of “Onkel Pö’s Carnegie Hall”, he was right at the centre of the world of jazz, probably more than ever before or after in his career – together with Herbie Hancock, Wayne Shorter, Ron Carter and Tony Williams the trumpet player had set-up the quintet “V.S.O.P.” three years earlier; as the other four people of the group had previously formed the legendary second quintet of Miles Davis, Freddie Hubbard could be considered to be his direct successor. And as Miles had at that point just retired from stage, the world of jazz probably listened to this Mister Hubbard from Indianapolis even more attentively than usually. In short: Frederick Dewayne Hubbard was well on the way to reach the zenith of his career. The concert in Hamburg with his own quintet was exemplary for the artistic standard Hubbard set in those days almost four decades ago.

The trumpeter always tended to be style-forming. Or to put it differently: almost every style formed him… Perhaps this was due to Hubbard’s personal development as a musician – for many years he was the perfect “sideman”, a colleague in other people’s ensembles. This was more important to him than his own projects, especially more important than releases under his own name or as a band leader. However, his own artistic reflections of the different epochs of jazz were always clearly discernible, even when performing in other people’s bands. Shortly after arriving in New York to start his career as a professional musician as a 20-year-old in 1958, after his studies and after undergoing a first initiation into the world of jazz together with the Montgomery-brothers back at home, Freddie Hubbard found himself right in the eye of the most important cyclone of modern jazz: he was side-by-side with Ornette Coleman at the recording sessions for “Free Jazz” in 1960. Five years later he joined John Coltrane to record “Ascension” – the big-wigs of jazz of each era, from J.J. Johnson, Slide Hampton, Thad Jones and Sonny Rollins to the arrangers Oliver Nelson and Quincy Jones, appreciated the stunning technical ability of the twentysomething from the countryside. Even Art Blakey, for a long time the most important talent-scout of contemporary jazz, took notice of the young man: already as of 1961 Hubbard was a member of the “Jazz Messengers” for three years – yet another outstanding accolade.

Hubbard was also hard-working – almost six hands of dedicated co-operation on other artists’ recordings, many of which are nowadays considered “classics”. He also recorded two much-valued albums with his own work. Often only drummers, bass players and pianists are considered “musician’s musicians”, or virtuosos, whose artistic quality is primarily lauded by colleagues, independently from their success with the audience or the market; However, back then this particular trumpeter must also have fallen into this category. Of particular importance is: epoch-changing music innovations were always reflected in Hubbard’s oeuvre – hard bop at first, then the revolution of free jazz, then the crossover into fusion and jazz rock. All of these can be identified in his work with a distinctive individual colouring, too. Because it was popular at the time, this great stylist even ventured into the slightly schmaltzy fusion genre – when he came on the market primarily for Creed Taylor’s label CTI. However, whatever music he may have performed, his technique was always on the highest level and the best moments of his performance were fireworks of jazz improvisation.

Together with the “V.S.O.P.”-legend, this was basically the prologue to the evening at “Onkel Pö”; Furthermore, at that time the album “The Love Connection“ had just been released and its title song also starts off the live recording made by the NDR broadcasting station on location at Lehmweg in Hamburg-Eppendorf. Hubbard’s band adopted some aspects of Blakey’s “Messengers”-strategy: appearing on stage together with the young up-and-coming saxophonist Hadley Caliman (who sometimes also played the flute), the then 23-year-old bassist Larry Klein - who would later develop into a surprisingly versatile artist, who also worked as a producer and accompanied songwriters such as Randy Newman or Joni Mitchell (he was even married to Joni for a while!)- and with the drummer Carl Burnett. Above all, the pianist Billy Childs performed brilliantly that evening at “Onkel Pö” – he was only 22 years old. Apropos, also the exceptional singer Leon Thomas was on stage in Hamburg that day – he will be featured in another release from the “…live at Onkel Pö”- series, also with recordings from this particular concert.

Freddie Hubbard’s career suffered a severe setback in 1993; or to be more precise: not a setback but a split with dramatic consequences. His lips could not cope with the high pressure of playing the trumpet any longer. It took Hubbard several years to heal and regenerate (his lips as well as himself!). These were very difficult times for him. Basically, he had to completely reinvent himself as a musician – and he started (as he sometimes had already done in the past) to perform on the softer, more gentle sounding flugelhorn, an instrument which is less physically demanding on the lips.

In 2008 Freddie Hubbard passed away at the age of 70 – das “wunderkind“ was praised in the obituaries as a “pioneer”… However, first and foremost he was the mirror in which several eras of jazz-history were reflected. All of them were present in Freddie Hubbard’s music – also at “Onkel Pö” in November 1978
Michael Laages