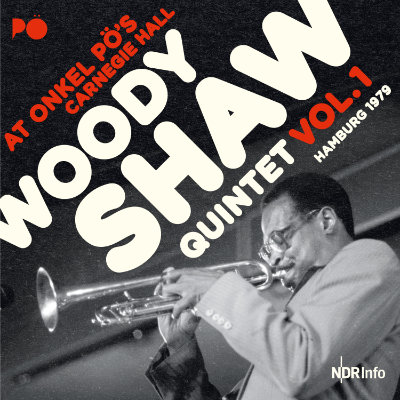 Here it comes: the next thrilling memory of a musician whom the world of jazz must never forget – despite his early death in 1989 at the age of only 44. After the earlier release of a concert given by the quintet of trumpeter Woody Shaw in 1982 at the “Onkel Pö’s Carnegie Hall“ in Hamburg we are now turning back the clock another three years for this CD. The band on stage on Lehmweg in Eppendorf in 1979 was also quite different; it was the first group Shaw could score some major successes under his own name with. The year before, in 1978, the band’s LP “Moondance“ had been voted recording of the year by the readers of “Downbeat“ magazine – and it was with the same colleagues Shaw went on tour with. However, everything remained in a constant flow: from the original quintet performing in Hamburg in July 1979 only bassist Stafford James was still on board three years later.

The percussionist on this recording was (and still is) one of the most influential representatives of modern mainstream of the last few decades; and it is indeed difficult to say which of the top jazz bands Victor Lewis did not enrich; already before his time with Shaw and certainly in the years afterwards. It was Tony Reedus who replaced Lewis three years later in Hamburg. Lewis in turn moved on to ensure total precision when it came to rhythm in other groups, e.g. in the band formed by Stan Getz. Already for a very long time he is also the reliable partner of the piano virtuoso Kenny Barron. The spirit of this era is still perceptible in the work of musicians like Barron (born 1943), Shaw (born the following year) and Lewis (born 1950). Whereas since the early 1970s the scene was dominated by cross-overs into rock and the consequences of the radical move towards a completely liberated improvised music in the 60s, virtuous musicians like Shaw, Barron and Lewis were searching for a definition for the swinging core of this music - the power of survival of the traditions.

Onaje Allan Gumbs, Barron’s colleague from New York, was of a similar calibre; he was part of the group of the summer of 1979 and was later replaced by Mulgrew Miller in 1982. Gumbs, who grew up in New York, did develop a distinctive predilection for the African roots of jazz. For many years the saxophonist Carter Jefferson, one of the many students of the unparalleled band leader Art Blakey, was a much sought after musicians; sadly, he died already in 1993 during a trip to Krakow in Poland. It has always been obvious how important the interaction with other musicians in the band was for Shaw, the band leader. He was constantly searching for answers. After three years Jefferson was succeeded by the trombonist Steve Turre, who developed an outstanding mastery in the art of musical conversations.

Both concert recordings, the one from 1982 as well as the earlier one - which is at the centre of our attention right now - showcase the trumpeter Shaw at the pinnacle of his musical development; maybe this is even more obvious in this earlier recording. The trumpet is swirling, flickering and twinning garlands: it is rousing, delicate and virtuosic – conscious of tradition and modernity. At the centre of all of this mastery was a humble and friendly man. Musicians and humans as Woody Shaw are missed more than ever in a business usually characterised by overbearing egos and hubris; humaneness is not often part of the picture. Woody is missing!

The drama of Shaw’s life has been told many times before: He was born on Christmas Eve of 1944 in Laurinburg (North Carolina) as the son of a gospel singer - from whom he also inherited his name at birth. Early in his career he was recognised as a true master with outstanding technical abilities (just as his role model Freddie Hubbard) and forceful intonation. Shaw’s play could be extremely fast but his musical language never lost its distinctness. At the same time everything he played seemed to have never been performed before – his colleague Randy Brecker considered Shaw to be “the last one in a long row of trumpeters who has really contributed something new to the field of the jazz trumpet”. Woody Shaw was also something else: a “musician’s musician“, highly appreciated by his colleagues who were delighted to perform alongside him.

In 1964, at the tender age of 20, he was invited by Eric Dolphy to Paris shortly before the latter’s death. He stayed for one year and was introduced to Bud Powell, Johnny Griffin and Kenny Clarke – a formative period in his life. Projects with Horace Silver, McCoy Tyner, Max Roach, Art Blakey and Gil Evans followed. He was also a guest performer in the “Concert Jazz Band” of George Gruntz. Europe became more and more important for him, especially Paris, and in the 80s a “Paris Reunion Band” formed around Shaw.

Then the drama unfolded … Woody Shaw was ravaged by dire diseases. Slowly but surely he lost his eyesight and in this state he tumbled in front of a subway in New York. He lost one arm. Several weeks later his kidneys stopped working. Woody Shaw died on 10 May 1989. He did not live to celebrate his 45th birthday.
Michael Laages

It all comes back to you_18.59
Onaje Allan Gumbs / Onaje Music Publishing