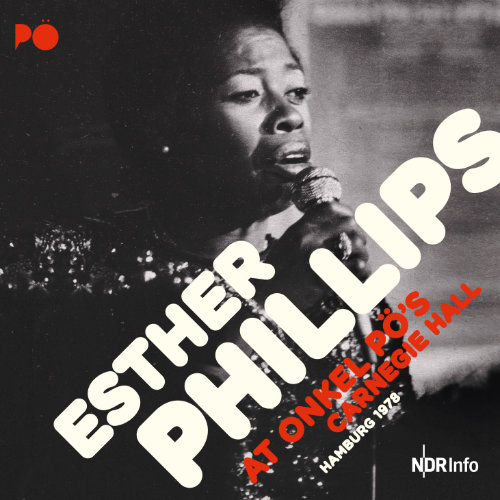 The voice of this singer seemed to originate in another world. Perhaps it was at home in some wild jungle…Esther Phillips went stalking in it with her recorder and collected sounds. Every one of them she also tried out herself – the growling and purring of large and small wildcats, the buzzing and chirping and screeching of numerous birds high up in the treetops, the dark and pulsating breath of a predatory animal behind the next turn of the road. However, this jungle was in fact a metropolis, New York for example – and therefore this spectacularly exceptional singer introduced herself as a “native New Yorker” on 11 November 1978 at a magical concert at "Onkel Pö’s Carnegie Hall” in Hamburg, the legendary hot spot, which once again turned into a seething cauldron of emotions. Back in those days this was almost always the case, when the dense concert schedule invoked the abysses and primal grounds of blues.

By the way, the thing about being a “native New Yorker” is only partially true – Esther Mae Jones was born on the day before Christmas 1935 in Galvestone, Texas. Soon afterwards she moved to Houston and later to Los Angeles, where the then 13-year-old girl amazed the audience of a talent-show as “Little Esther”. Label-boss Herman Lubinsky (as J.C. Marion wrote about the early years of the singer, who would later call herself Esther Phillips) paired the raising star up with Johnny Otis, the seasoned master of blues. After a first meeting she quickly became part of his new vocal-quartet “The Four Robins”. In this setting “Little Esther” was a total success right from the start; also in other band line-ups she remained highly successful.

Furthermore, “Little Esther” - or more precisely her mother, who was in charge of the contracts of the minor - got involved in legal disputes concerning the child’s career. Already several record companies were fighting for the young talent, who was constantly on the road with the stars of the era and who was in the thick of the strong current of black “Rhythm ’n’ Blues“. Her name was mentioned in the same category with colleagues such as Ruth Brown or Dinah Washington – this was a special honour, because the only role model “Little Esther” might ever have had, was Dinah Washington. Soon she also made contact with powerful jazz artists: e.g. the Texan saxophonist Arnett Cobb and his instrumental-colleagues Jimmy Forrest and Sonny Stitt.

Her success lasted for ten years, during which the girl became a true professional; disastrously for her, she did not only make contact with jazz musicians during those years but also with the eternal scourge of the scene: drugs. At the same time the “Rhythm ’n’ Blues“-movement lost momentum and her albums did not sell that well anymore. Again and again she disappeared from the scene for a while and had to reinvent herself several times during the following two decades – in the jungle of the metropolis, in the business and the drug swamp. Clemency is a rare thing. Anyway, in the early-60s the singer changed her family name to “Phillips” (allegedly because of an advertising spot); she also appeared in England in a BBC-show alongside the “Beatles” and was sometimes invited to jazz festivals: 1966 to Newport, 1970 to Monterey. However, in the cold light of the day the world of music had almost forgotten the early fame of Esther Phillips.

She was rediscovered in the disco-sound era: with “What a difference a day makes“, a song which had previously been an inherent part of the repertoire of Dinah Washington, an artist much admired by Esther. Of course, the song was also performed in Hamburg at “Onkel Pö”, just before the end of the concert. The time to look back and recall had by then already started long ago – Esther Phillips once again returned to the world of soul, blues and pop. It was certainly obvious to a jazz audience how intensively everything was connected and entwined in the power of this voice, to which nothing seemed impossible.

Esther Phillips had survived in the jungle of the metropolis. The concert at “Onkel Pö”, which was recorded by NDR and featured powerful accompanists and a highly enthusiastic audience - now documented on two CDs – proved, that she was still able to evocate the ghosts.

Once again she managed to completely enchant her audience that evening in Hamburg in November of 1978. Some weeks later Esther Phillips turned 43. However, time was running out for her – she did not make it to 50. She passed away on 7 August 1984.
Who knows: perhaps she had always remained “Little Esther”.