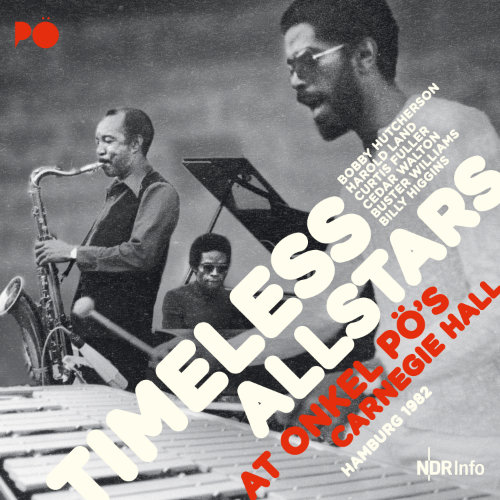 Initially, the name was meant literally – the music produced by this ensemble should be timeless; one should be able to listen to it again and again throughout the years, independently from the prevailing zeitgeist. All the artists who came together to form this label have proven - over decades in different bands - that they were masters of the “mainstream”- sound of jazz: the saxophonist Harold Land, the trombonist Curtis Fuller and Bobby Hutcherson on the vibraphone; they were accompanied by a rhythm section which was always more than just that – with Cedar Walton at the piano, the bassist Buster Williams and Billy Higgins, one of the most outstanding drummers of jazz. The title is absolutely right: they were “All Stars” – true masters in their respective fields.

At the same time this sextet was also a sort of session-band; put together – at times with minor changes to the cast – for concerts and tours organised by the Dutch jazz-promotor Wim Wigt, who ran a concert agency and a recording label called “Timeless” in the mid-1970s. Many of this small company’s recordings were produced live during the tours – insofar the NDR-recording of the Hamburg concert of the “Timeless All Stars” from April 1982 at “Onkel Pö’s Carnegie Hall” is in line with the tradition of the Dutch producer.

Two of the masters from that particular recording are still alive and could in theory be invited to the release party, all those years after the concert took place - Curtis Fuller, born in Detroit in 1934 was already performing alongside Miles Davis, John Coltrane and Jimmy Smith as a tween in the mid-1950s; later he also worked with Dizzy Gillespie, Art Blakey and Count Basie: he has remained an al-rounder throughout his life. The youngest band member that night at “Onkel Pö” was Buster Williams from Camden, New Jersey, who had just celebrated his 40th birthday. In his case it is probably easier to ask which artists he didn’t work with – he certainly is one of the most multifaceted bassists of his time, with a powerful intonation which could also be experienced at his many solo performances over the years. Buster Williams is one of only a few musicians who can effectively keep an ensemble together with their rather difficult instrument; and, as recent recordings show, he is still able to do that even today.

The same is true for Cedar Walton on the piano; also his energy – both as a soloist and as part of the team - was a source of unity. As a sideman he is certainly among the piano-virtuosi most often heard on recordings. Walton, born in Texas in 1934, already performed in the “Jazztet” of Art Farmer, Benny Golson and Gigi Gryce in the 1950s; later he moved on (as so many others) to Art Blakey’s “Jazz Messengers”, at a time when Freddie Hubbard and Wayne Shorter also formed part of that ensemble. He remained an advocate for modernity right until his death in New York in 2013.

In 2001, the jazz world had to bid farewell to the drummer Billy Higgins much too early; he only got 65 years old but left a remarkable legacy: the “World Stage” training programme for young musicians. Higgins was also the member of the “Timeless All Stars” who had the most diverse background – ranging from the early ears of rhythm ’n’ blues to Ornette Coleman and Don Cherry. The four very extensive tracks from “Onkel Pö” tell us also a lot about the broad horizon of Billy Higgins.

It was also in 2001 that Harold Land died; he was certainly the least well known star from the “Timeless”- ensemble. Land took the same path as Higgins from tradition to modernity – and he formed part of one of the legendary groups of hardbop, founded by Max Roach and Clifford Brown, who had died shortly afterwards. Regularly Land’s paths and those of vibraphonist Bobby Hutcherson have crossed. Bobby had certainly ventured deep into the realms of modernity already before his cooperation with the “Timeless All Stars” (after an instrumental initiation by Milt Jackson) and he added a very special and powerful vibraphone-sound to the group. Bobby Hutcherson passed away in 2016.

Each of the sextet’s artists added his very own profile as a musician to the “Timeless All Stars”; already - but not only - by contributing their own compositions. They also had enough time to develop and grow individually; Solo performance was followed by solo performance – and the thing that kept the whole construction together was developed further from chorus to chorus: the deep understanding for the powerful swinging music of an era; an era, which propagated the magic of often seemingly endless improvisations with all the energy available, without simultaneously ever wanting to lose the rhythmical-harmonic ground under its feet.

Those of us who are regularly listening to young musicians, who are - just out of their respective colleges of music – trying to develop their individual style and to succeed on the market, will rediscover a lot of their forebears’ traditions in them. They were and remain truly “timeless” – in a way.