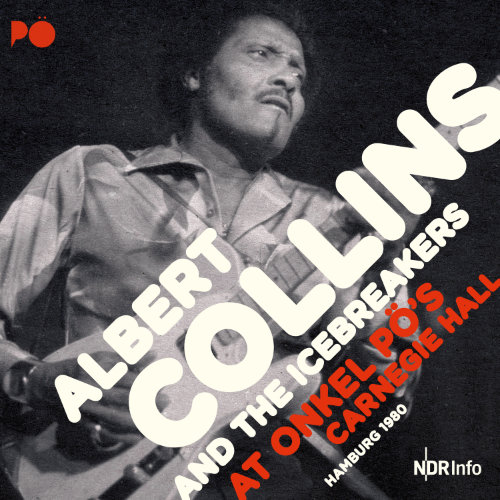 Fire inside the Ice
or
Welcome back from Heaven!

It is uncertain, who initially had the idea to provide the Texan blues musician Albert Collins with trademarks all linked to ice: to call himself “The Iceman” and to name one of his main recordings of the late-70s “Ice picking”. Already the music made by the young Collins, born 1932 in Leona/Texas, was praised to be especially “cool”; and of course, when he performed on the tiny stage of “Onkel Pö’s Carnegie Hall” on Eppendorfer Lehmweg in Hamburg, he was joined by his band called “The Icebreakers”. Naturally, on this winter evening no cold barrier needed to be overcome, certainly not in the overcrowded “Pö”, where most probably (as so often) tropical temperatures will have prevailed. The extremely incited and enthusiastic blues community of Hamburg turned the evening into a glittering party in honour of the guest from Texas.

In the same year another recording was made at the WDR “Rockpalast”; even now, after all those years, when listening to this recording and the one from Collin’s visit to Hamburg, it becomes perceptible how much enthusiasm Albert Collins must have unleashed in Europe back then. By the way, “Blues am Dienstag” (Blues on Tuesday) was in these days the name of the almost compulsory radio show for blues-aficionados on NDR; without any private competition the public broadcasters back then could show-off with such specialities. Golden days, long gone…

Back into the cold and the ice … only a cunning guitar-specialist could have come up with these definitions. Because one can indeed compare the Collins-sound on the Fender-“Telecaster”-instrument as cut or “crushed” ice: cutting at times, especially in the upper regions, as if the thin layer of ice on the surface of a lake was about to crack. However, beneath the surface it is seething. Nobody can deny, that Albert Collins was indeed somebody who told the story of blues in a “hot” way, just as he himself had experienced it.

Lightnin‘ Hopkins was a cousin and also came from Leona; the organist Jimmy McGriff was the first role model for young Albert from Texas, even before he switched to the guitar. Aged 18 he launched his first band, the “Rhythm Rockers”, two years later (after seeing Clarence “Gatemouth” Brown) he decided to make the guitar his instrument for the rest of his life. Soon Houston became the blues home base of Albert Collins; over time, he became a guitar specialist and singer, much appreciated by producers and colleagues. However, it took Collins almost two decades to get the European audience enthusiastic about him. It was still one of his first journeys to the Old World when he came to “Onkel Pö” early in December. In 1978 he had been a guest of the Dutch “Barrelhouse”-band, his first ever gig outside of the USA. The event is documented on a LP; in a way, with the concert at “Onkel Pö” (and the one at “Rockpalast”) the “European” decade of Albert Collins started. In 1985 he formed part of the “Live Aid”-project and came to the EXPO at Sevilla, besides performing at festivals worldwide. Colleagues, even from avant-garde jazz, counted on him: John Zorn for his “Spillane”-project, for instance. However, Albert Collins already died in 1993, aged only 61 – in the preceding years younger blues masters, such as George Thorogood or Robert Cray, had discovered him as a source of inspiration and were successfully seeking his company. His name adorned the star line-up at the Montreux Jazz Festival and at the Paleo-Festival in Nyon, just around the corner on Lake Geneva. It was also in Nyon that his terminal illness first broke out.

The recording from “Onkel Pö” really covers the entire concert; including the 20-minutes long opening of the “Icebreakers”, led by saxophonist A.C. Reed and percussionist Casey Jones (both of them also sing) – only as of “Listen here” is Albert Collins master of the house, scat-singing and playing the guitar in parallel runs. At the very end he performs his popular circus act, the instrument “talking” with two different voices… The first part of the concert ends after about one hour and the second part starts again with four intro-pieces, especially to feature saxophonist A.C. Reed and again featuring, as at the very beginning of the evening, classics such as “Stand by me”, before Mister Collins himself takes over once more (with “Mustang Sally”). By the way, always at the moment of the first sounds from Collins, unexpected shifts of harmony occur – maybe the master on the “Telecaster” has tuned it “open” with the capo tasto again: this was one of his trademarks at the onset of his career.

A very independent and original blues-master can be experienced once more on this recording. The exceptionally atmospheric “Onkel Pö” with its passionate Hamburg audience turns the encounter, even after three decades, into a true event – into “showtime”: with this announcement Collins always got onto stage. Welcome back from heaven, Mister Albert!