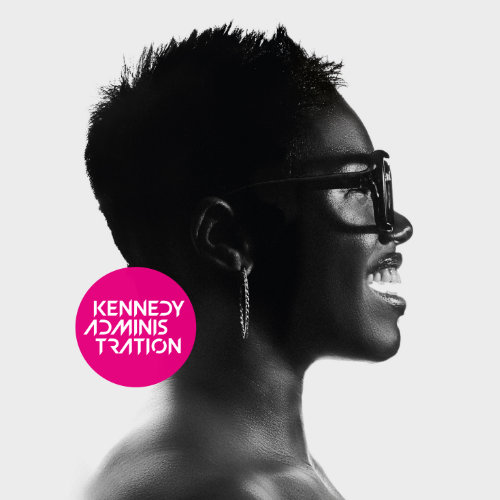 A dynamic presence on every bandstand she graces, singer Ms Kennedy brings a captivating soulfulness to the proceedings on the Kennedy Administration’s self-titled debut. Whether it’s the funk-laden opener “It’s Over Now,” her smoldering take on Al Green’s “Let’s Stay Together” or energized interpretation of Billy Preston’s “Will It Go Round in Circles,” her own nostalgic “Mama’s Kisses” and other compelling originals like the alluring “Finally,” the anthemic “Victory Song” or the group’s old school throwdown “Let’s Party,” the Michigan native and Brooklyn resident makes a stunning impression on her first recording.

“I like to describe her as a ‘true artist for no reason’,” says keyboardist-musical director and songwriting partner Ondre J. Pivec, who was born in the Czech Republic, also lives in Brooklyn and is currently touring with Grammy-winning singer Gregory Porter. “The minute we started playing together three years ago, something clicked right-away. It seemed like we both knew what to do to make things work. It was like magic.”

That magical connection developed on their longstanding Wednesday night residency at Groove, a strictly covers club in the heart of New York’s Greenwich Village. And while the Kennedy Administration delivered on that gig with the kind of crackling intensity of a modern day Rufus & Chaka Khan, Ms Kennedy and Ondre J also proved to be a potent songwriting team when they began collaborating on their originals. “It’s mostly a team of Ondre and myself when it comes to writing, then we’ll take it to the boys and then they start adding bits and pieces to it too, so then it becomes a group creative effort.”

The boys are bassist Chelton Grey and veteran drummer Nathaniel Townsley, who has played with Joe Zawinul, Richard Bona, Will Downing and Alejandro Sanz. Together with Ms Kennedy, Ondre J, superb backup vocalist Stephanie Fischer and special guest harmonica ace Gregoire Maret, who appears on the alluring bossa nova “Don’t Forget to Smile,” they create an irresistible vibe on their groove-heavy debut.

While putting the ‘fun’ in funk, Ms Kennedy also conjures up some thoughtful lyrics and meaningful messages on her original tunes. “This is really my first go as far as writing,” she confesses. “And through some of these songs, I’m having an honest, open conversation with a lot of things I don’t usually talk about —heartbreak, the New York experience and the daily struggle of being here, the feeling of loneliness that can set in from being in the big city.”
“Mama’s Kisses,” for instance, is about wanting that elusive ‘home feeling’ that you can’t always get from living alone in the Big Apple. “I talk to a lot of my friends and we still go home because we need that,” says Kennedy. “So that song is me wishing for that place where I really feel like I’m where I’m supposed to be. And I can’t necessarily say that I’ve found that here in New York or have felt that feeling just yet. So it’s kind of a wishful thinking tune for me.”
Born in small-town Belleville, Michigan outside of Detroit Metro, Kennedy was born on a farm with hogs and chickens and cows. “Then we moved up to Saginaw Township and lived the suburban life — that really conservative, sheltered kind of Bible belt life,” she recalls.

After living in Chicago for a few years, she moved to New York in February of 2011 for what was supposed to be a six-week stint while working with a cruise line band. “Unfortunately, the job feel through so I spent my first year in New York basically almost homeless, bouncing from place to place. And every time I would try to get out of the city, something else would happen where I would be stuck here. And I was pretty angry for a while because I didn’t want to be in New York. I really felt out of place. But lo and behold, it worked out.”

That feeling of persevering through adversity comes across in “Victory Song.” As Kennedy explains, “I decided I should write a song that says despite the disappointment and sometimes failures along the way, I’m gonna rise out of this. We performed that song at Rockwood Music Hall, just voice and piano, and I still get chills thinking about it because I had the audience sing the refrain with me ‘I will overcome.’ To be in a room full of people singing that, it was just electric. And a lot of people were in tears, because it’s a powerful message, and it’s beyond just me. It’s a message that people from all walks of life can relate to.”

From one universal message to another, the Kennedy Administration switches gears and keeps it on the goodfoot with the infectious dance number “Let’s Party,” which conjures the upbeat vibe of Earth, Wind & Fire’s “Celebrate” or Prince’s Purple Rain classic, “Let’s Go Crazy.” Says Kennedy, “There’s certain songs that you hear and it doesn’t matter where you are, your foot just gets to tappin’. ‘Let’s Party’ is one of those songs. I’ve seen older people, younger people, even babies dance to it. Everybody gets into it. I would love to see this song played at family reunions, graduation parties, wedding receptions, bar mitzvahs. I could imagine people working out to this song at the gym or playing it after their team wins the Super Bowl. I want it to be the soundtrack of your life.”

From funk throwdowns to alluring bossa nova, thoughtful storytelling and the ultimate party song, the Kennedy Administration shows an uncommon diversity on its auspicious first outing. As Kennedy puts it, “I don’t want us to be pigeonholed. I want that freedom and flexibility. Because we really love music, so why not try everything?”
Adds the Brooklyn-based singer who makes such a striking debut on Kennedy Administration, “I was discouraged a lot after moving to New York but I just kept pushing. My parents were not happy that I didn’t pursue an education and I was just doing music. They didn't like seeing their only daughter struggle. Meanwhile, I was just gung-ho on performing and doing music somehow and not having a mentor, not having anyone leading me or guiding me. So for me, this band is just an example of what happens when you follow your heart…what happens when you wipe those tears and you put those bandaids on the knees and you keep fighting.”

VICTORY SONG
Kennedy, Ondre J Spoken intro
It is within the scheme of life that we all experience some form of pain, defeat, frustration. And we might look around and see others and wonder why it is that they’re doing well and better. But you have to know that regardless of your circumstance and situation you can overcome. We shall overcome! 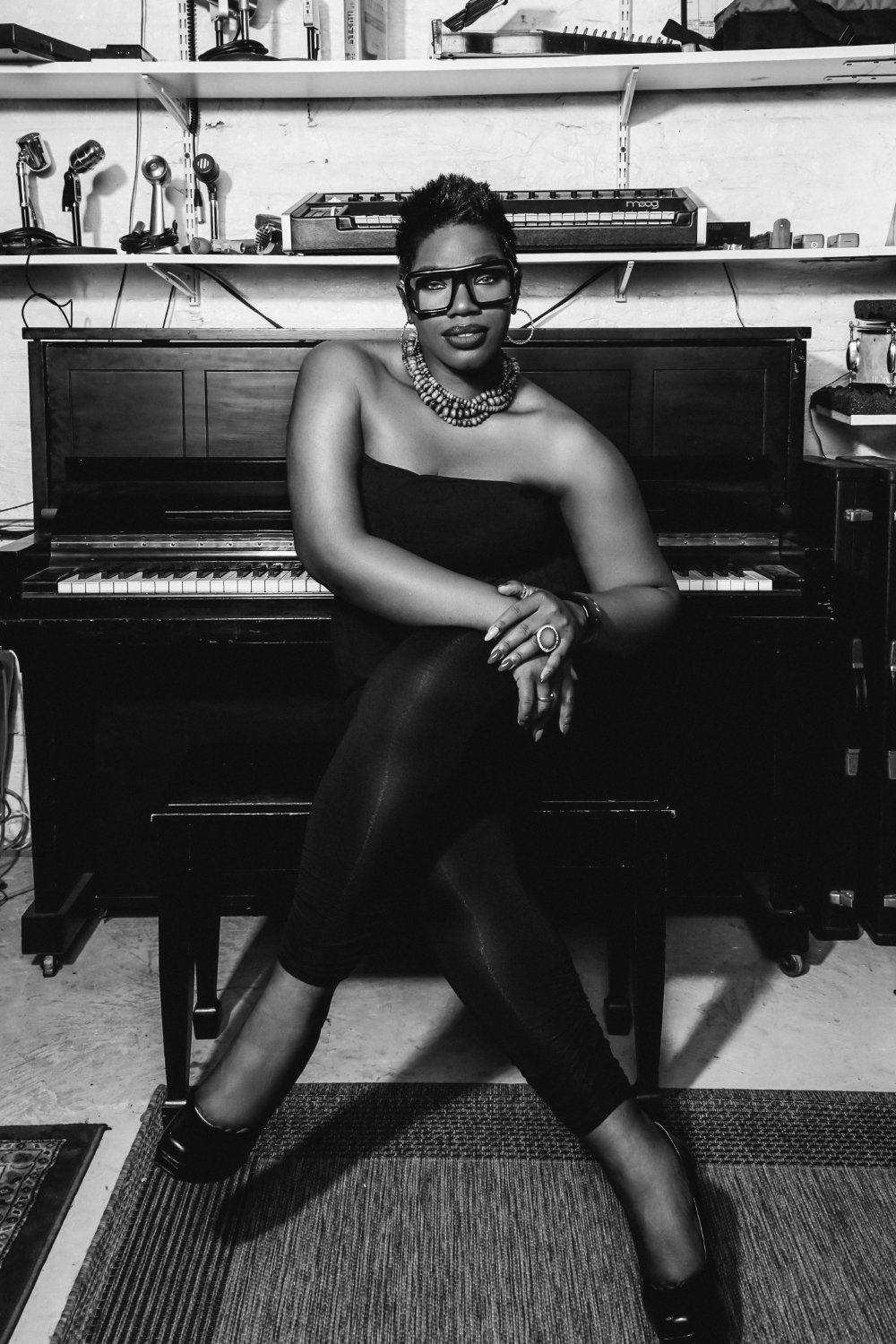